What is this statue in Star Wars Rogue One?

In Rogue One (2016), when transitioning to the planet Jedha, there's shown an extremely large, fallen statue of someone.

Who is this a statue of, what's their significance, and why is it now in ruins?

According to the Starwars Wikia:

That is an un-named Jedi. 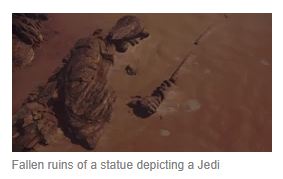 I believe the point of this shot is to show 2 things:

Why is it now in ruins

As more of the galaxy was mapped, more direct hyperspace routes were discovered. These new passages made the old, winding routes, such as those connecting with Jedha, obsolete. The once-popular Jedha became an antiquated curiosity rather than a relevant destination, a location for those who desired spiritual guidance, a deeper purpose, or to simply exile themselves from the larger galaxy.

Not the answer you're looking for? Browse other questions tagged analysis star-wars rogue-one .

22
What is the significance of the penguin in Fifteen Million Merits?
11
How exactly did they find an actress that is almost an exact clone of original Mon Mothma?
15
Which of the previous Star Wars films does one need to watch before Rogue One?
83
In what spot would the new Star Wars movie "Rogue One" go in the Machete Order?
4
Why did Cassian Andor abandon his mission?
9
Was Jediism shown to be a religion in Episodes I-VI?
0
Did Krennic make a calculated error?
3
How did the rebels crash the two space ships into the gate?
12
Do the new Star Wars movies use any paintings for set backgrounds?
14
Time jumps in Star Wars

// TODO sg: TMP solution until we are confident in our current implementation of async imports // once we are, we can move the if into the js entry file and dynamically load the mark obsolete module