How exactly did they find an actress that is almost an exact clone of original Mon Mothma?

The actress who plays Mon Mothma in Rogue One: A Star Wars Story is extremely similar in appearance to the A New Hope actress.

In the actual casting process, how did they manage to find someone so similar looking? How many people did they need to interview to get this close? 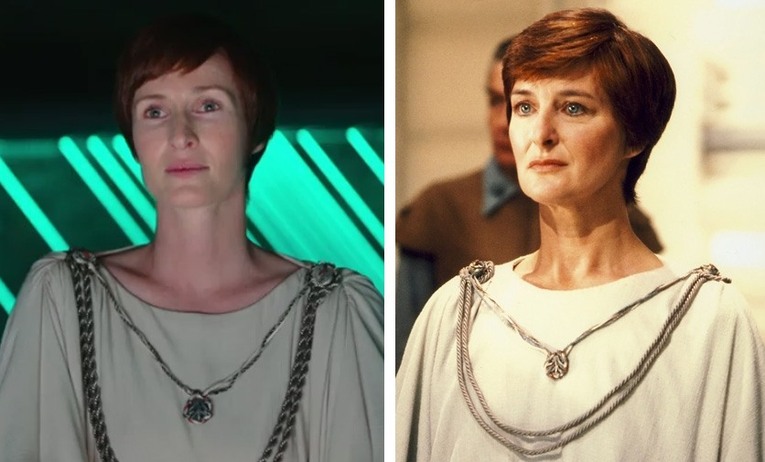 In The Order of the Stick (webcomic) #431, Redcloak discusses that he has created three decoys for Xykon. Xykon is an epic lich sorcerer who looks like an animated skeleton with fiery eyes and blue and red robes.

MitD: How did you get them to look exactly like Xykon?”

Redcloak: I didn't. They're human skeletons. I put a blue robe on them and called it a night.

The Sapphire guard on the other side of the battle already expects Xykon coming into battle, so any similar looking figure will make them believe it's Xykon.

(Image shows the three decoy Xykons from strip #428. Does not show the real Xykon.)

Mon Mothma is exactly the same case. The actor in Rogue One doesn't need to be an “exact clone”.

Mon Mothma is in a rebel base among other rebels, just where you expect her to appear. She's surrounded by rebel solders of various species, most of who wear combat uniforms. Mon Mothma sticks out of those soldiers and pilots like a sore thumb, because she's about the only one who's in civilian clothes.

Further, even among civilians, Mon Mothma wears very a recognizable style of clothing and accessories. The white robe and the unusual necklace does all the work. With that costume and a little bit of hairdresser work, many women who aren't even similar could play a convincing Mon Mothma. Every moviegoer will look at the clothes and role and behavior, rather than the neck or jaws or height or other hard to alter physical details.

Not the answer you're looking for? Browse other questions tagged star-wars casting a-new-hope rogue-one .

44
How much of Star Wars did George Lucas actually write?
9
Modifications to the Star Wars original trilogy
10
What do we know about the creature whose skeleton we see in Star Wars?
1
Sandcrawler, real or fake?
21
What was used to create the hyperspace jump sounds in the original Star Wars trilogy?
17
How was the voice acting done for Grand Moff Tarkin
11
Did the Empire have a backup set of plans for the first Death Star?
4
Does Chewbacca have a real language?
45
Why did Obi-Wan have to explain full details about Mos Eisley to Luke?
14
Time jumps in Star Wars