What is the film technique for someone breaking into pieces?

In certain movies I have seen the antagonist's arms falling off, then their legs, then their bodies split in two and then their heads fall off when the camera angle has not shifted. Or the scene can be that the body is flaking away, or is like an explosion where the body itself explodes.

Like in Harry Potter Deathly Hallows Part II where Voldemort was finally killed and his body started to dismantle as shown below: 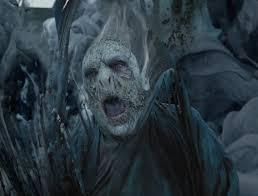 In this he has started flaking away and decomposes.

Also in this example in 100 worst ways to die, this guy went through toxic waste, he is starting to melt: 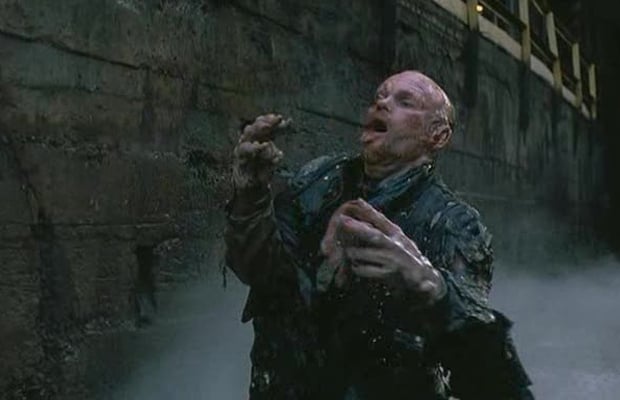 I haven't been able to actually get a picture of someone falling apart because of IT problems.

Here is a picture of a character's head exploding from the movie Scanners(1981): 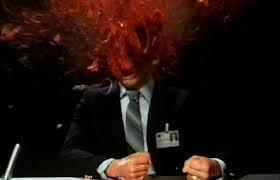 After all this, what are the film techniques used to film these scenes when the camera angle hasn't shifted at all?

While Voldemort's end in Harry Potter and the Deathly Hallows was achieved by computer graphics the other two movies did not use them to create their effects.

Your second picture is from Robocop (1987) and shows Emil (Paul McCrane) melting after being doused with toxic waste. According to imdb

The 'Melting Man' sequence was conceived by special make-up effects designer Rob Bottin as a two-stage effect, with increasing amounts of flesh melting off from Emil's (Paul McCrane) bones in each stage. About three-quarters of McCrane's head and chest were covered in make-up appliances. For the shot where Boddicker (Kurtwood Smith) runs over Emil with his car, a life-size dummy was created with the stage two make-up. The dummy was jointed to give the correct effect of buckling while being hit. The head was always supposed to come off, but the fact that it rolled neatly over the car's windshield was pure luck. For the shot from inside the car that showed Emil's guts splattering over the windshield, the cast and crew had gathered several days' worth of catering leftovers in a pot. This had become a disgusting liquid mess that was subsequently thrown at the windshield to get the desired effect.

The exploding head scene from Scanners according to imdb was created by:

filling a latex head of the actor with dog food, leftover lunch, fake blood and rabbit livers, and shooting it from behind with a 12-gauge shotgun.

This is typically done using a computer-generated particle system. In a computer, 3D objects are often stored as a mesh of triangles. (This is done because the math needed to deal with triangles is simpler than other shapes and can be done very fast.) To make an effect like this, an artist would have to construct a face and/or body in the computer (possibly by scanning the actor), making a 3D mesh that represented the surface of the person's body. The triangles that make up the mesh can then be made to fly off in different directions producing the dissolving/exploding effect.

Particles don't necessarily have to be the triangles that make up a mesh, though. They can also be whole objects themselves. For example in the Matrix Reloaded, the Burly Brawl fight scene uses a bunch of Agent Smiths as particles in the last shot, for example.

In many animation packages you can set what type of object represents a particle, and set various properties of the particle and how they change over time. You set things like how quickly new particles are born, how long they live, their velocity, their size, color, opacity, etc. They can follow a flow field to make the particles fly off in some complex pattern. They can also attract or repel each other or other objects in the scene.

Not the answer you're looking for? Browse other questions tagged film-techniques effects .