How can Jasmine survive in the tunnel in Independence Day

In Independence Day, Jasmine (Vivica A. Fox) opens a door in the tunnel to save herself and her son during alien attack. She gets in and survives, but how?

Assuming debris and fire does not get into that chamber, which is very unlikely, the heat or the lack of Oxygen (thanks to @Paulie_D) must have killed them. This fire produced very high temperature and turned buildings into pile of rubble.

So, how can they survive from that fire caused by alien attack? Is it just a movie goof?

The "fireball" is actually the front of a blast wave emanating from the point the alien ship fired straight down. In various clips it can be seen that it's a ring of fire. 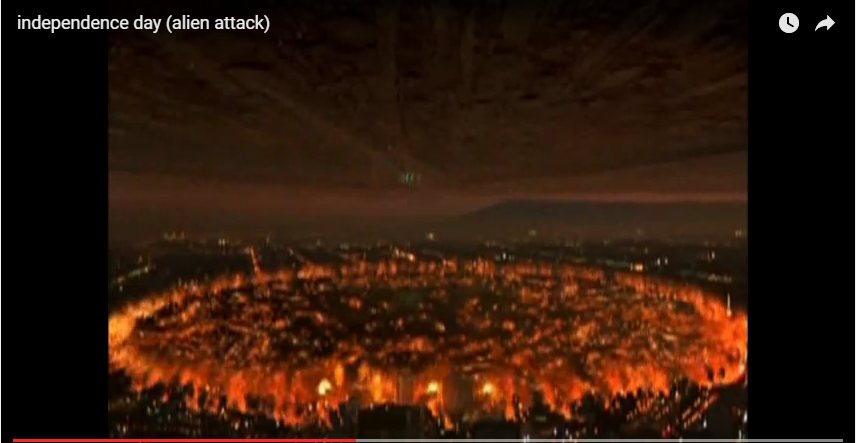 So it's possible that if she could somehow have avoided the fire going round corners*...the door to the 'safety area', in fact, remained open after the dog (Boomer!) had jumped through it...she might not have been burned.

I'll discount (by which I mean waffle past) heat, I think, because, as I said, it's a wave of fire (and associated heat) which should have meant transitory heating only.

As pointed out in the comments (thanks @cde)...movies tend to work on the basis that fire isn't hot unless it actually touches you. Hold your hand a few inches above a lit candle flame...then tell me that's true.

*I'm not up on fire flow dynamics but I suppose it's possible that the wave just pushed the fire in a straight line past an open door and didn't go inside.

Moving on...a tunnel is actually a very solid structure and can't really be 'blown down' by a blast wave. Sure it might collapse but Jasmine & Co are in an evacuation escape area so basically, as long at the vertical shaft to the surface doesn't collapse they should be fine.

Flying debris is also not an issue as she is safely out of the path being in the sheltered area.

Assuming all that we have another problem. Oxygen.

The fire ball / wave front would have quickly eliminated all of the oxygen from the surrounding area and although there's a chance as it would have created a vacuum and drawn in air from outside. Let's be generous and assume there's enough oxygen to breathe.

So do Jasmine (and the filmmakers) get a pass...I'm gonna say no...because blast waves create overpressure.

That was a big frakkin' bang...judging by the buildings being blown up/down/out we'll have to put the pressure at well over 10psi.

Even at 4psi I think she's a goner:

Realistically, she'd have been a crispy critter, suffocated, and blown to kingdom come.

Apologies, I only found the whole scene in Spanish but you get the point.

Not the answer you're looking for? Browse other questions tagged plot-explanation independence-day .