Why did Arthur think this statement is a joke?

In Joker, after attending stand up comedy where he was seen taking notes about what makes people laugh, just after this scene there is one another scene where he is writing different jokes. Ironically, one of them that we see was:

The worst part about having a mental illness is people expect you to behave as if you don't. 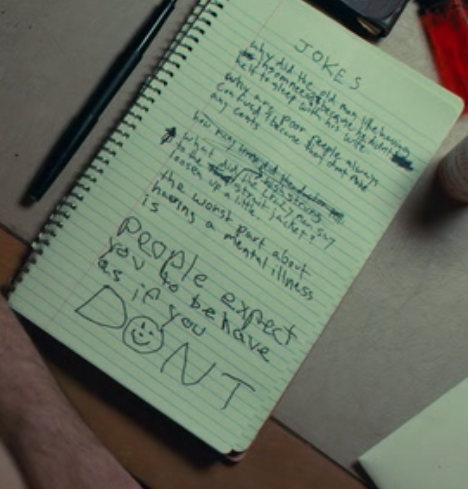 Now, one thing that is more horrifying apart from the statement itself is that our protagonist literally believes that this is a joke. Why? There are two reason:

Now, the point that I am stuck at is the following: Does he think that people will laugh at this statement? I think I am missing the part of the character because knowing this answer will tell me more about his psyche.

To a 'rational' mind, none of Arthur's jokes are funny.

To my recollection, he doesn't make one 'actually funny' statement in the entire movie. He doesn't laugh at things that other people say that are, & he responds 'incorrectly' to some that aren't.
[This is aside from his well-acknowledged 'nervous laugh' when under emotional pressure, and not to be confused with that.]

From a cinematic perspective, someone had to actually construct that page for the audience to see it wasn't a single thought on an otherwise blank page, but also to be credible if, as we're doing here, someone snapshots the page to read and examine at leisure later.

Arthur has grasped the idea that a simple two-liner joke sets up a premise, then destroys it by having the punch-line either reverse that premise by 'surprise', or at least leave a double-entendre as to which of two interpretations could be the correct one.

The jokes you see on that page are written evidence of that, all neatly in one place for us to grab a snapshot and examine after the fact.

So the last one - the joke we actually get time enough to read as the action unfolds is an extrapolation of that. The audience is given the chance to see what he is writing whilst ostensibly taking notes on how a comedian structures his act live on stage. Arthur so clearly doesn't "get it". He's seen to be laughing in all the wrong places.
This is a 'movie short-cut' allowing the audience to see what he is thinking whilst supposedly taking notes on what he is seeing.

Not the answer you're looking for? Browse other questions tagged joker .

7
Are Arthur and Bruce related?
4
Is Arthur's mother evil?
12
What gives Arthur the idea that his life is not a tragedy, but a comedy?
15
Is the way Thomas Wayne is portrayed in the "Joker (2019)" based on any comic reference?
11
How does the Joker (2019) fit into the established Batman timeline?
3
Why did Randall say that Arthur/Joker tried to buy a gun from him?
5
Why did Murray invite Arthur to the talk show?
5
Did Arthur kill his imaginary girlfriend - the one that lived in his apartment?
4
Exactly what kind of illness/disorder was Arthur suffering from?