Did Arthur kill his imaginary girlfriend - the one that lived in his apartment?

In Joker (2019), just after Arthur came to know about his childhood reality where he was abused and brain traumatised which led to his present day condition. That's also the reason he has such an unusual laughter whenever he faced any emotional pressure.

He directly went into his "girlfriend's" room which we were shown that was in his imagination only. The time that he spent with her was a creation of his own mind. But I am really confused whether he killed her because this picture just freaked me out: 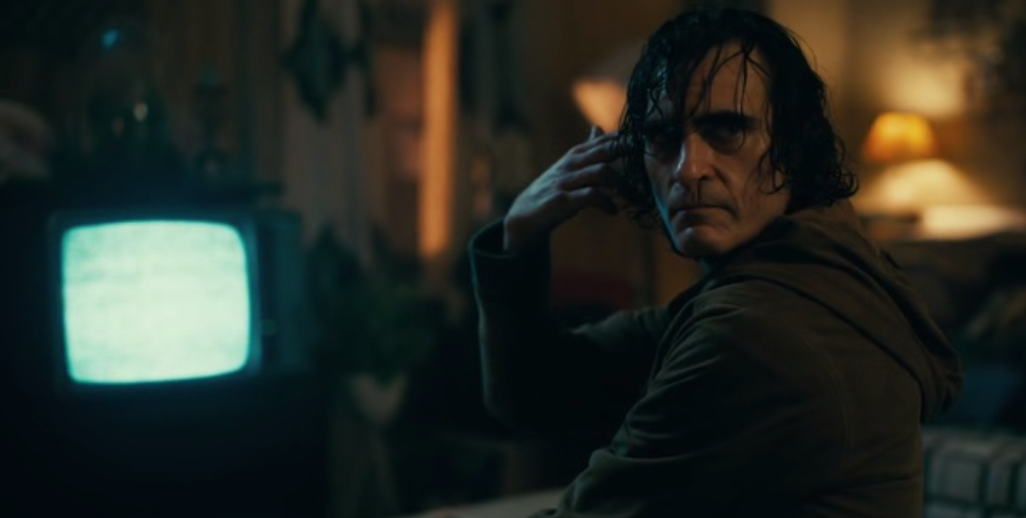 I mean, the look on his face is terribly disturbing. But the movie didn't tell whether he actually killed her or not. I am pretty confused at this point of time. What does that shooting himself signal actually meant? It was also shown earlier when that same woman was struck in the lift and calling the apartment awful. He made the same gesture to her but it was more kind of an amusing one, which was not meant to harm anyone. But here, the story is different. He is terribly disturbed and can do any harm to anyone. So does he really kill her?

We also saw that after that there was a scene where he killed his own mother. I know that this is another question but both of these scenes were back-to-back and connected. Therefore it is important for me to understand both of these incidents. I know that he is going through transformation and a lot of havoc has befalled upon him, but he was the guy I thought would always love his mother. He was the kind of character who cared for her. And the last thing I expected was him killing her. I felt really shocked and amazed as it was really beyond my expectation.

Your question is a bit confused... but let's try to read between the lines and answer the single question as stated in the title.

The 'shot to the head gesture' is one used earlier, initially by Sophie, when they meet in the lift (which was a 'real' event).

Most of the purported interaction between Arthur and Sophie only happens in Arthur's head, except for the meeting in the lift and this scene, where she finds him in her apartment.

We never see what happens to her, but if we look at how other characters are 'handled' by Arthur and the cinematography/script as his mental state deteriorates, then we have this evidence that she survives unharmed.

The plot and cinematography has absolutely no qualms about us seeing the demise of any character who dies in the movie.

We see Arthur murder (amongst others) Murray Franklin; his mother; the 'Wall Street' guys on the train; Randall, the clown who gave him the gun... and we also see him allowing his dwarf friend, Gary, to leave unharmed.

I think the fact that we don't see him murder Sophie is sufficient evidence that she and her daughter survived unharmed.

I think the only 'debatable death' is when he walks the corridor leaving bloody footprints at the very end of the movie. I think all others are given to us, the audience, as they happened... or didn't.

This was answered by the director and reported by a cinematographer in an interview with SlashFilm:

In the end, you can question how much of it is actually real. For you, are there any visual cues in the movie that distinguish fantasy from reality?

Well, even the things that are there I’ll never talk about. We wanted to make the interpretation of the real versus what’s not real, a part of the viewer’s experience. For instance, his relationship to Sophie is a fantasy to him. Some people have asked me, “Was she killed?” Todd [the director] makes it clear she wasn’t killed. Arthur is killing people who’ve wronged him in a certain way, and Sophie never wronged him. In terms of what we did visually to play with the real and not real, there are callbacks and scenes that mirror each other. We leave hints using imagery or way we covered scenes similarly between scene. Outside of that, I like that people can have the conversation and come to their own conclusions.

Taken from my own answer to What happened to Sophie in her last encounter with Arthur? on Science Fiction and Fantasy.

Not the answer you're looking for? Browse other questions tagged plot-explanation joker .

4
Why did Sean get onto the plane in the Event?
6
When exactly do Gordon's intentions in "The Gift" turn?
5
Why would that kill his mother?
3
Did Jud bury his wife at that place?
12
What gives Arthur the idea that his life is not a tragedy, but a comedy?
3
Why did Randall say that Arthur/Joker tried to buy a gun from him?
3
What did the writers mean by this detail in one scene of one episode of "Alfred Hitchcock Presents" from 1957?
2
Who kills Julian in Children of Men?
4
Exactly what kind of illness/disorder was Arthur suffering from?