Why did Missandei say this?

In Game of Thrones S8 E04, "The last of the Starks", Cersei kills Missandei, before killing she asks if Missandei has any last words, and Missandei replies

Why did she say that, but nothing else?

plot-explanation dialogue game-of-thrones
Share
Improve this question
edited May 7, 2019 at 13:07

We all know Dracarys is the word to release Dragon fire. Missandei is telling Daenerys to burn Cersei Lannister. 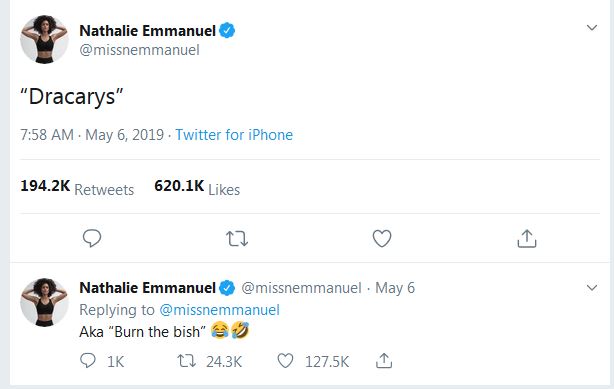 Nathalie Emmanuel who played Missandei tweeted after the release and response of S08E04. She tweeted "Dracarys" and replied with "Burn the bish". Bish is slang for bitch and she is referring to Cersei Lannister by that word.

She is saying light em' up.

She knows she is about to die, and is basically telling Daenerys to "Burn them all" as the Mad King might say.

Dracarys is clearly meant for Dany. Missandei knows that her life is over, and she is saying, you know, "Light them up."

In addition, she herself later confirmed this in an interview with elle.com.

(NATHALIE) She's normally quite calm and stoic. Her yelling is not really something we've seen before. I wanted to make the most of this moment and make sure that it meant something. In a way it was her own war cry, to her friend and her queen. It's so funny because she'd told Grey Worm earlier, "My people are peaceful." But in her last breath she's like, "Burn them all! Burn these fuckers to the ground."

Dracarys means dragonfire and is what Dany says to command her dragons to breath fire. She is telling Dany to burn Cersei, and burn anything that stands​ in her way.

Missandei knows she's not leaving the rampart alive, and, rather than pleading or showing weakness, she stands tall and shows defiance.

(This is roughly analogous to "Give me liberty or give me death," although Patrick Henry was not facing execution when he said it.)

Not the answer you're looking for? Browse other questions tagged plot-explanation dialogue game-of-thrones .

7
Is Cersei Lannister menopausal?
4
Was this Cersei's plan?
18
Why does Cersei say that she killed her husband?
14
Did anyone else know about Cersei being pregnant?
20
Did Tyrion even have the authority to do this?
48
Why were the bells ignored in S8E5?
15
How do the dragons exactly know whom/what to burn?
10
Where did Qyburn suggest that Cersei go?
15
On what ground did Sansa say this in S08E06?