Is it possible for this character to have died so quickly from that wound?

In Tangled, when Mother Gothel stabbing Eugene, is it possible for him to die that fast from that wound?

Dying from a stab can depend on a couple of things such as the targeted organ, depth of the stab, and lastly pain. 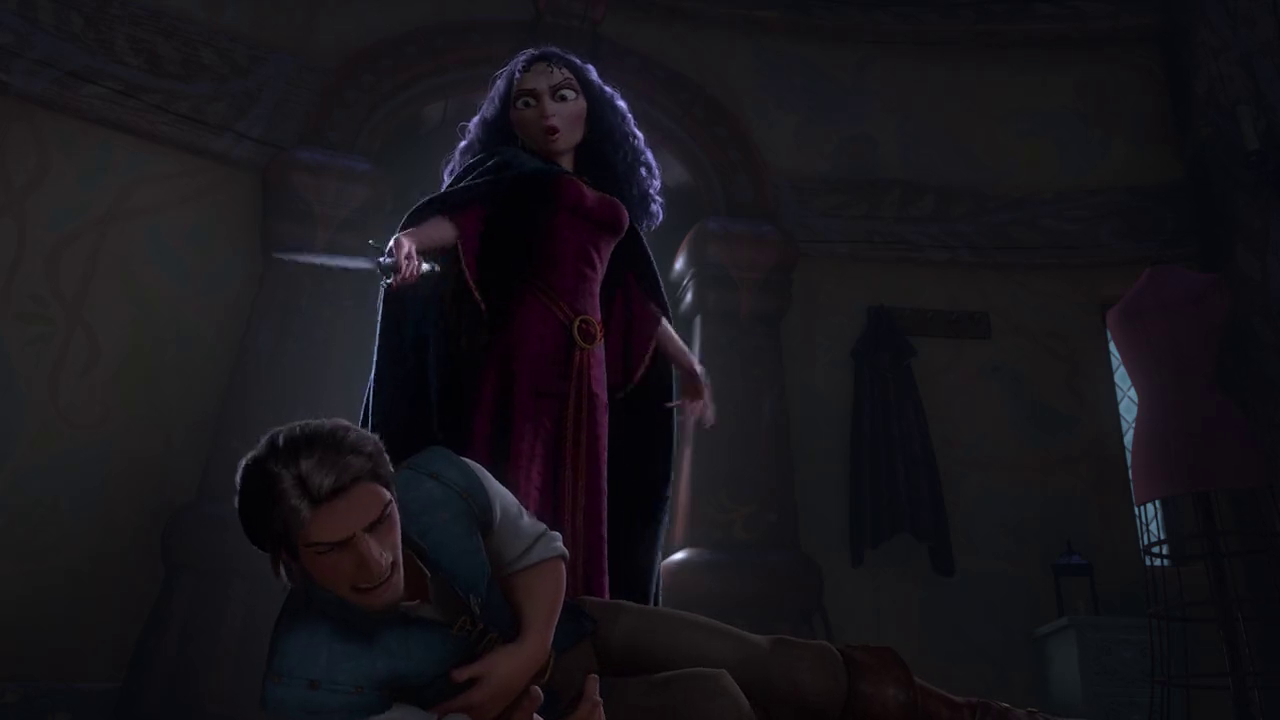 We can see he was stabbed on the right side around the ribs. That's where your lung, diaphragm and liver are. The stab might have affected the intestines as well. We can see that she stabbed him with a big knife, so the wound might be deep. And lastly the pain, a stab wound can cause too much pain which may not be easy to endure.

So, this kind of stab wound can cause a person to die very quickly.

Credits to Galastel, loss of blood can also be a reason behind death.

Contrary to what @AJ says, you can't die of pain. Whatever causes pain - that can kill. Chronic pain can be enough of a stress to make you more susceptible to disease etc., thus indirectly killing you. But pain from a wound can't kill. Worst it can do is make you lose consciousness.

The location of the wound is too low to involve the lungs. However, there's a kidney there, and the liver, if Mother Gothel stabbed upwards. If the knife transected the renal vein (that's the vein that drains the kidney), which is quite likely considering the location of the wound, the bleeding from that vein alone (not counting other damage) would drain half of Eugene's total blood volume and kill him in 5 minutes. He'd lose consciousness from blood loss in less time than that - about 2 minutes.

You might say "but we don't see that much blood". Setting aside for a moment the fact that this is Disney, and Eugene doesn't get cut on the piece of broken glass he uses to cut Rapunzel's hair either, most of the bleeding would actually be internal - he'd be bleeding into the abdominal cavity. So you wouldn't see all that much blood on the floor.

Not the answer you're looking for? Browse other questions tagged realism tangled .

32
Is this mask really possible?
7
Closing credits for Brave: subtle nods towards Tangled and Frozen?
4
How did Fenton survive more than 7 days without food in the basement?
4
Considering his wound, wouldn't Cheyenne have suffered far more?
8
Did Mother Gothel care for Rapunzel at all?
11
It is possible for water to freeze so quickly as happened on Lost in Space?
5
What was the purpose of Flynn Rider's real name in Tangled?
4
Why does Flynn Rider say that Rapunzel will die?
3
Do astronauts really have to pay for pillows and blankets as shown in Ad Astra?