Closing credits for Brave: subtle nods towards Tangled and Frozen?

The Frozen Theory is fascinating, and very interesting, but this question is not about that.

Anyway, in the Brave end credits there seems to be quite a few six-pointed sun symbols shown in the background which bear a striking resemblance to the emblem of the Kingdom of Corona (the setting of Tangled). Also in the Brave credits are quite a few snowflakes, which seemed like maybe a reference to Frozen, which makes extensive use of snowflake visuals. 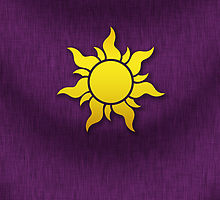 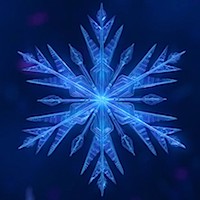 (Above images are from Tangled and Frozen; not from Brave.)

The appearance of the snowflakes could possibly be explained by the fact that Brave is set in Scotland, and the film was originally planned to contain a lot more snow than it eventually did. But it seems more than that to me. Does anybody know if they are deliberate nods towards the (at the time) most recently released, and next planned Disney princess films?

UPDATE: The plot thickens. I was just re-watching Tangled (my kids are obsessed with it at the moment, so I get to watch it several times a week) and noticed something in the end credits for that film too. The credits (which can be seen on Youtube) include various scenes from the film such as Flynn ascending Rapunzel's tower, "Wanted" posters, the man with the hook playing piano in the Snuggly Duckling, Flynn being chased by a bear, a map of the Kingdom... wait a minute... back up a bit... Flynn being chased by a bear?! There are no bears in Tangled, so what's with the bear in the credits?! A forward reference to Brave?

I've found no references about this anywhere online, so I'm going to say no, they are not (deliberate) references. There are plenty of Easter Eggs that Disney, and Pixar in particular, are famous for. For an example of these, see this link.

However, no member of the production team for any of these films has made any comment about observations like yours, so it seems likely there are coincidence.

I would also add that because you want to believe this so much, you will find more evidence in support of it than there perhaps really is. That's not to suggest you're wrong or that these scenes in the movies can't be interpreted this way - just that, based on all the evidence available, it seems unlikely they are intentional nods to other Disney films.

Not the answer you're looking for? Browse other questions tagged disney frozen brave crossovers tangled .

7
Significance of the similar color palette for Anna's winter dress and Elsa's coronation dress
9
What is the significance of blue to green transition of costume colour between Frozen Fever and Frozen?
5
Why were the songs not translated/dubbed into German?
14
How did Gothel in Tangled know the special song for the flower?