Why does only Rachel have open eyes in the Friends poster?

In the Friends season 4 poster, we see all of them sleeping: 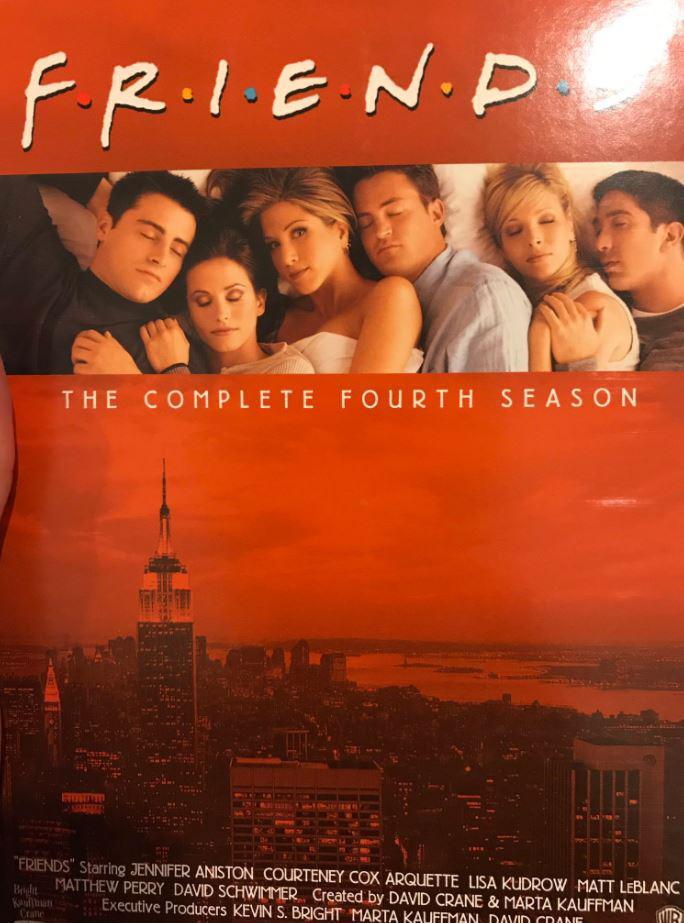 While all of them have closed eyes, Rachel kept them open. There are various conspiracies about it like it's all a dream.

But is there any legit reason for it?

analysis friends posters
Share
Improve this question
edited May 7, 2018 at 12:08

It seems to me that the most logical reason is to make sales.

Looking at the bottom of the poster, you can see that Jennifer Aniston received top billing for this series (or, at the very least - on this poster).

Through most of the show's runtime - Rachel (Jennifer Anniston) remained an incredibly popular figure in the series, with several of the shows key plot points being focused around, or affected by her on-again-off-again relationship with Ross (David Schwimmer).

It should also be taken into consideration that film and TV traditionally (and still frequently) make use of the 'Male Gaze', which is essentially the practice of casting an actress that the perceived majority of male viewers would find physically attractive.

In light of this, in the context of the poster - it appears that Jennifer Anniston is modelling this role. By being semi-nude (or at least giving the illusion of it) and by being the only one of the 6 who has their eyes open, this would immediately draw the attention of the viewer towards her.

In addition to the above - it is also possible that the marketing team behind the poster wanted potential viewers to ask similar questions to the one you asked. By eliciting intrigue in potential audience members, it may make them more likely to watch (purchase) the series in order to obtain answers to the questions raised by the poster.

Additions / corrections to my original answer:

Jennifer Anniston didn't receive top billing: After further research, it seems that the cast of Friends all received equal billing, and had their names listed alphabetically. Whilst there is no direct source for this information (other than assumptions made), it is highly likely given the relatively well known fact that all cast members worked in union to negotiate equal salaries from around the start of the show's third season; and therefore may have negotiated equal billing rights as part of this.

Rachael (Jennifer Anniston) isn't naked, it's an illusion: In a practical sense, it would make little to no sense to ask an actor / actress / model to actually be naked when staging a photo like the above, especially when the illusion of nudity could be so easily created. Further to this, looking at the image I posted below, you can see that Jennifer Anniston is wearing a white dress, not lying under a quilt. The way the image is framed in the poster masks this fact, and provides the illusion of nudity.

Having said this - it might still have been possible that this illusion was what the marketing team behind the poster were looking to achieve, as per the reasons given previously. So, there is a possibility that Rachael was naked, or partially nude.

There are other, similar photos from this shoot: After some Googling, I found that there exists similar images, taken from the same photoshoot as the image in the poster. 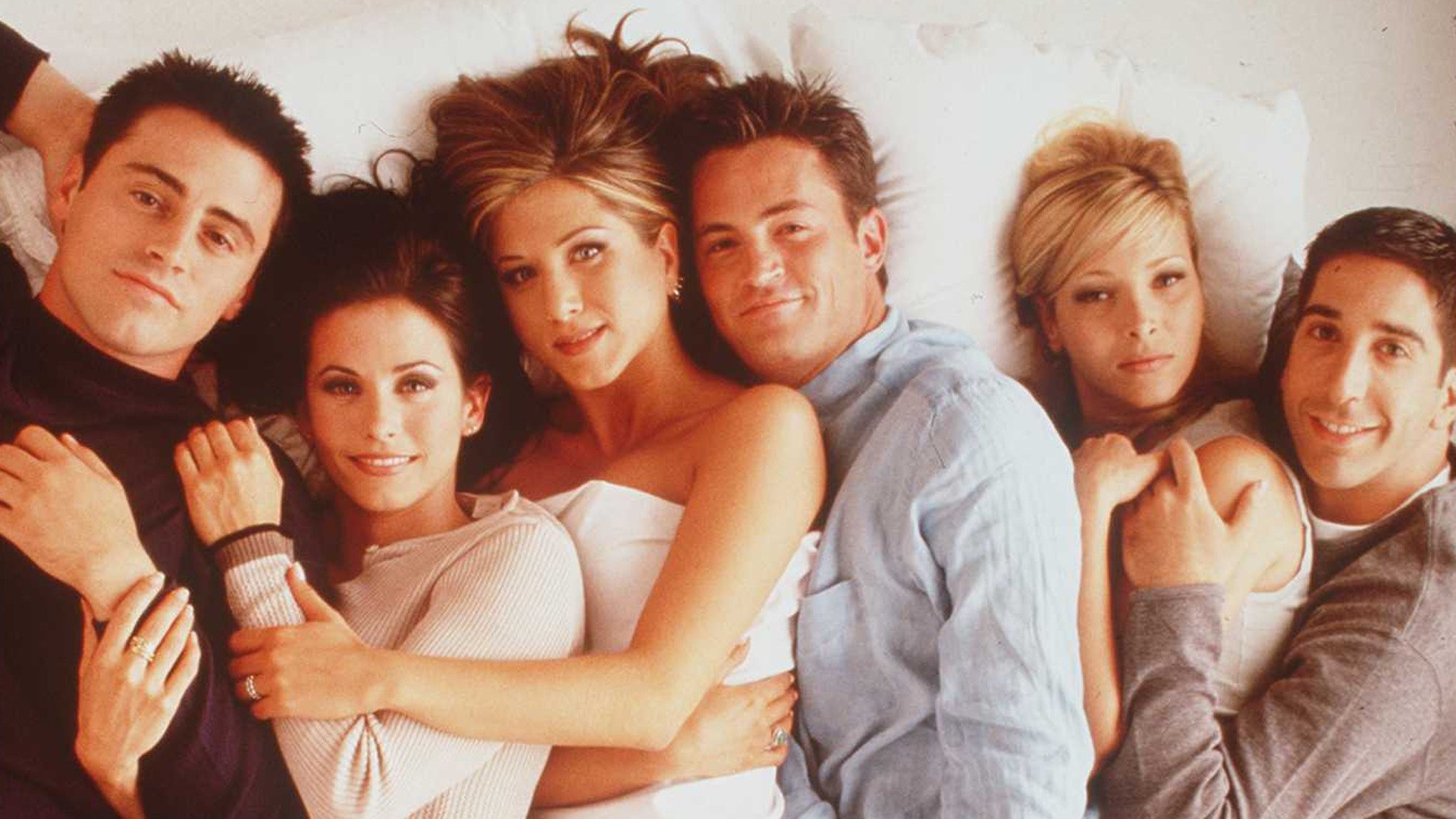 In this image, all characters have their eyes open - and are (mostly) smiling whilst looking at the camera.

It's possible that both, the image above; and the image in the poster; were used simultaneously in marketing the Season 4 home media release (format [DVD, VHS .etc] is unimportant for the purposes of this question/answer).

In support of what I said previously - the marketing team behind the poster likely wanted to draw attention to Rachael (Jennifer Anniston) for this poster (other advertisements for Season 4 may have had different requirements). The alternative image I posted above would likely not have achieved that as well as the image in the poster.

I can’t speak to it in this case; however, shows with a season arc, that may focus more on one character over the others, the marketing poster (especially on DVD covers) usually reflects that focus artistically. For example, with a show I’m more familiar with, The Shield. Here is just a couple of quick examples where the marketing art suggested the season theme to a certain extent.

Season 1 cover represented the team with Mackey as the leader. 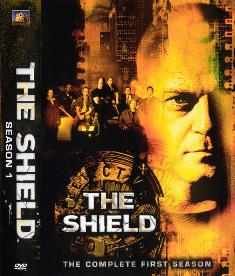 Season two cover is suggesting Mackey is isolating himself this season and his badge is dim and fading. 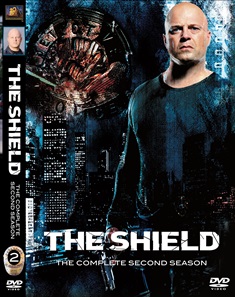 Season 4 highlighted the new captain, standing by Mackey in solidarity. 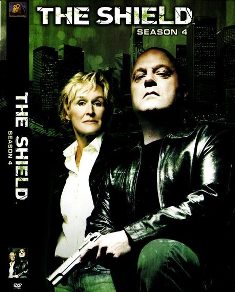 Without knowing the 4th season of Friends, I would suggest that maybe that poster’s art work may lend a hand to foreshadowing the events in the season. Could Rachel, with her eyes open, represent any centralized theme for the season? I researched and found some theories 1. Rachel dreamt the whole season. 2. Rachel was the most "woke" character that season 3. had to do with her dream she had on the eve of her wedding. Without watching the season, I can't speculate on the artistic meaning of the artwork. I would suggest that it had something to do with the season.

Not the answer you're looking for? Browse other questions tagged analysis friends posters .

5
What's the point of switching Monica's and Rachel's rooms?
2
7 Erogenous Zones by Monica
22
Was the father known as soon as the decision about pregnancy was made by the writers?
11
Does the title of True Detective have any meaning within the show?
32
Why can't Joey eat that dessert when he was on a date with Phoebe's friend?
31
Did Rachel or any of her friends know about Gunther's crush on her?
7
Is there any meaning behind the shot of the poster of flies in Season 5 'Gliding Over All'?
7
When Rachel learned about Chandler and Monica, was this a nod to Sex and the City?
26
Was this pillow joke on Friends intentional or a mistake?