How do the White Walkers interact with their dead army?

I have been going through the GoT's wikia, and learned that the White Walkers in HBO's Game of Thrones have a language called Skroth.

So, I was curious regarding how the White Walkers communicate and command their dead army. In the show, they just walk ahead of them and just do gestures with their ice swords(?).

So, is that it, or do they have a language to interact with them? Or is it Skroth?

David J. Peterson, conlang creator for HBO's television series Game of Thrones, had this to say:

Also, the information on Skroth there [Wikia] is wrong. I created something for the White Walkers initially called Skroth, and I believe they didn’t end up using it. And that was for season 1; I didn’t do anything for it for season 2.
— David J. Peterson, "Ei Mahrazhi’th Drivoe", Dothraki.com

In other words: they developed a language but it was never used, and there is nothing in the show displaying White Walkers communicating with language in any way other than potentially telepathically, even to each other, let alone to the wights (members of the army of the dead), while in the books they speak in a language that sounds like ice cracking.

The only instances we've seen in the show that are technically communication (but not really a perceivable language) are the shrieks/screams that both the wights and White Walkers have made.

In "Valar Morghulis" (Game of Thrones, S02E10), the White Walker that leads the army of the dead (and Sam stumbles upon) screams/shrieks with his weapon raised, which seems to communicate to the wights "Attack", or "Onward", or is perhaps a rallying call so that the scattered wights nearby group up and follow him - it's not really known. Out-of-universe, it's a dramatic introduction to the reveal of this enormous army we (the audience) weren't aware of. 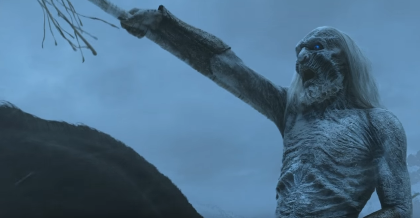 ... it lets out a loud shriek/scream, and this ultimately results in nearby wights being alerted, causing the group mortal peril.

This would also technically classify as communication, but not necessarily a language.

Beyond these rare instances of communication, the wights seem to follow quite complex instructions that indicate a telepathic/magical command from the White Walkers, rather than an explicitly verbal language (like Skroth, or the ice-cracking language of The Others in the books).

I believe Skroth was developed to be the show's vision of the language Martin had in mind for his Others in the books.

The Other said something in a language that Will did not know; his voice was like the cracking of ice on a winter lake, and the words were mocking. - A Game of Thrones, Prologue

Skroth was ultimately scrapped for the show as the producers felt it would lessen the impact of the introduction of the White Walkers. However, it is described in a similar way.

David Peterson, the language consultant who developed Dothraki and Valyrian for the show, also created a spoken language for White Walkers that the showrunners intended to include in the pilot. It’s called Skroth, and probably won’t end up being used even if White Walkers do one day speak.

“It was actually going to be for the very first scene of the show where the White Walker comes and cuts that guy’s head off. There are parts where you hear them kind of grumble and vocalize; it was going to be for that,” Peterson explains to Zap2it at San Diego Comic-Con. “I think ultimately they decided they didn’t want them actually saying stuff and even subtitle it. That might have been a little corny, honestly, for the opening scene of the show.”

Skroth sounded “pretty scratchy,” Peterson explains, because he used audio modification to “give it a particular sound.” As “Game of Thrones” reveals more and more about the White Walkers and their culture, there’s always the chance characters like the Night’s King could speak. Peterson expects he’ll start over if that happens.

“It’s an open question if there’s going to come a point where they actually have a dialogue,” he says. “Because they didn’t get used, I don’t know if I would still use it. I think it would be an open conversation. There is stuff there that could be built on, but I wouldn’t be surprised if they wanted to do something entirely new, and that would be fine.”

The White Walker are a sentient and intelligent species, so some form language communication is to be expected. The screeching we hear is probably the remnants of that development.

As far as other forms of communications, Martin has been mum on whether the White Walkers share a bond with the wights they raise...

and in response Martin said,

Martin gives this response (or similar), come to be known as excellent cheese answers, to any question that he does not want reveal all the information on.

3
How do White Walkers communicate with humans?

60
Did the White Walkers spare Sam?
4
How useful are dragon glass arrow heads when fighting the white walkers in Game of Thrones?
22
White Walkers vs Army of the Dead
18
Can dragons be controlled by White Walkers?
7
Can White Walkers talk?
5
Why is dragonglass effective against White Walkers?
17
What is Bran doing in S08E03?