What is Patrick Jane's 'foolproof line'?

At the end of season 6, episode 12 of The Mentalist, Patrick Jane says to Kim Fischer that he has a foolproof line. Before this, halfway through the episode, this 'line' manages to aggrovate Mr. Whittaker when Patrick is with Agent Cho outside his business building and Mr. Whittaker hits Patrick.

Going back to the end of the episode, Kim asks Patrick what it was he said to Whittaker to make him so aggravated, and he moves in, whispers in her ear and she gives him a sarcastic backhand to his chest. 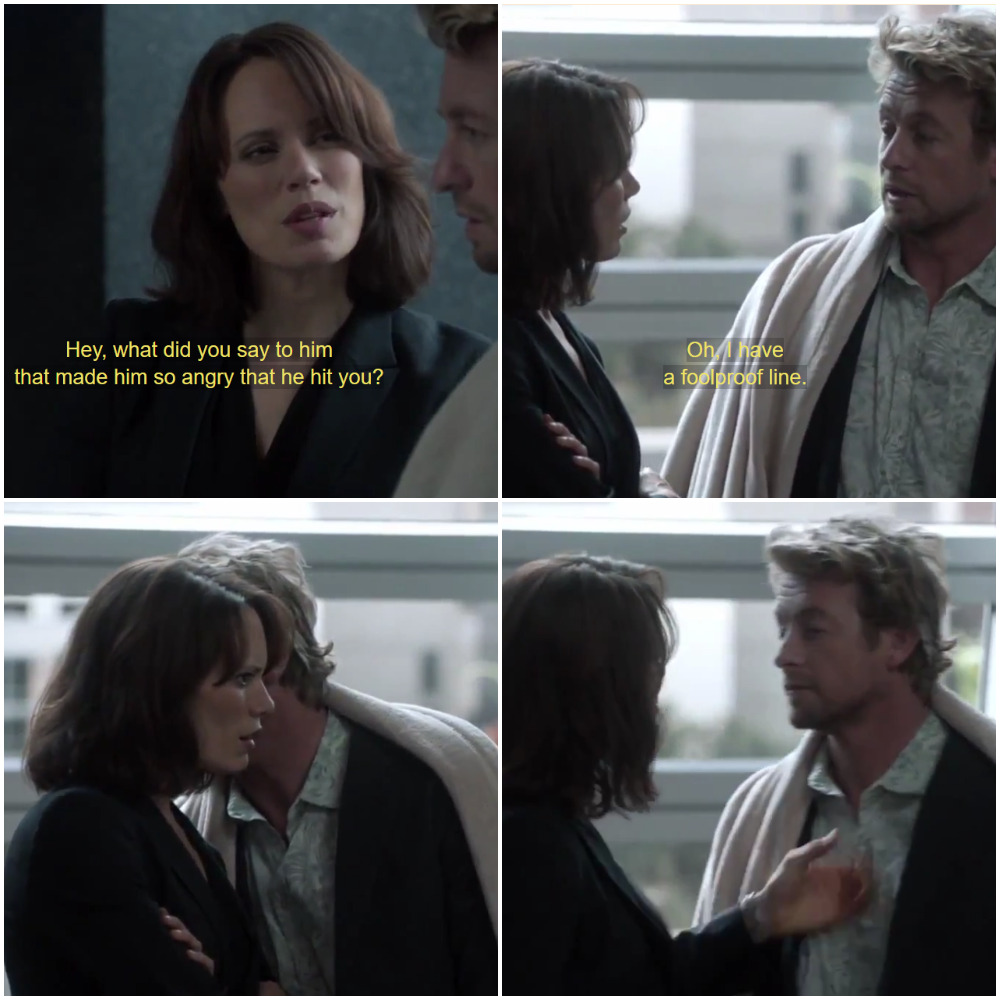 What is his foolproof line?

Both times that Jane says "the line" (to Whittaker halfway through the episode and to Fischer at the end) his face is hidden behind the other actor's face, and there's no audible whisper.

Additionally, in the online scripts for this episode that I was able to find, "the line" is only given as "whispers indistinctly." So, it seems that even the writers who wrote this episode never defined what "the line" actually is.

That being said, Patrick was making it sound like he had discovered a dirty secret of Mr Whittaker and he was trying to blackmail him with it, so "the line" was probably something dark - probably illegal and, I'm thinking, likely of a sexual nature, though I obviously have no evidence of that. If "the line" is truly foolproof in provoking a violent reaction, it would need to be something that could offend anyone, of either gender, from a pious churchgoer to a raucous biker gang member.

Not the answer you're looking for? Browse other questions tagged analysis the-mentalist .

38
What is the meaning of the line at the end of Chinatown?
4
What happens to Jane's BMW in Mr.Brooks?
18
What is J.J. LaRoche's dark secret?
2
What is the last line spoken in Texas Chainsaw Massacre
11
What is the CBI in the Mentalist?
8
Did someone ever refer to Patrick Jane as Mentalist?
8
How did Red John predict the final short list of Patrick Jane?
5
What is the significance of this line from We Need to Talk About Kevin?
2
Why did Patrick Jane have to steal the suspect list from LaRoche by hiring Donny Cullpepper?