At what stage of animation are branding assets like posters created?

At what stage of animation films, televison shows, are branding assets like posters created?

Is it early on in the process, before anything else, or is it after all the footage has been shot, so that they can get required photographs etc.

It seems that there are some misunderstandings with how animated films are made.

There are several different kinds. Most modern animated films use computer graphics to create the animation - this is anything from the big CGI animation companies like Dreamworks or Pixar.

Even modern "hand drawn" animation from Disney - like The Princess and the Frog - is drawn digitally and composited in a computer. For both of these, there's no "shooting film" or "photographs". It's all done in a computer.

With a couple of styles of animation, they do "shoot" footage but it's all still images shot one at a time which are later strung together to make a moving image. This is done with traditional hand drawn animation - which is pretty rare now because of how laborious it is - and with stop-motion animation.

These films, assuming they aren't very short, still take a very long time to complete... often years... and they will even go through script and character changes throughout the process. See the story about the recent rewriting of Zootopia.

It simply doesn't make sense to create marketing materials for a project years before it will ever hit theaters. Most animated films are marketed starting with teaser trailers about a year to six months out of release and, by then, the film is pretty much done.

Even at this point, the still images used in marketing, like for posters, are generally not direct from the film, they are created whole-cloth by the marketing department for advertising the film. If they create this at the beginning of making the film, they might include old character designs that were abandoned or feature the wrong characters.

There are obviously exceptions to this.

With a sequel, they're advertising a film that, to some degree, already exists. The main protagonists are already image locked, there are existing logos that need only minor adjustments. Generally what changes in these films is the "bad guy" and, often, the really early marketing for sequels won't include these characters. When creating a sequel, you can market it whenever you like in order to let viewers know that the series is continuing. This is particularly useful because of how long these films take to produce.

If we look at the links provided by BCdotWeb in the comments, we see the following image for The Incredibles 2 and Cars 3 posters: 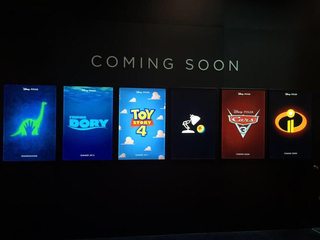 These posters don't even have content, they're strictly logos and the logos are nearly identical to the existing films' logos:

In both cases, very little was done to update the logos for the upcoming film and it's clear that Pixar is mostly interested in telling fans what's on the table for the next years - which they already know since it's currently in production.

But, I would argue that concept art and logos are not the same thing as actual footage or finalized character designs used for the purposes of marketing a completed (or nearly completed) film.

In general my prior statement is still the case. Poster art, previews and other materials are generally not created more than a year or so before the film is released.

Not the answer you're looking for? Browse other questions tagged production animation marketing .

25
What is a “performance capture” animation movie?
4
Which are the “several forms of animation” used by Wes Anderson in Fantastic Mr. Fox?
2
What kind of animation/drawing program do they use to make South Park?
2
Why are the Latest Episodes of South Park not in 3D animation?
7
Are there any existing animation templates for movie graphics?
8
How do film-makers keep track of where they are in a complex stop motion animation scene?
34
Was “Ralph Breaks the Internet” the first Disney production to feature computer-animated renditions of these characters?
4
Why do so many movie advertisements mention “Only in Theaters”?