What exactly did Vader do with his hand in Rogue One?

Kind of spoiler for Rogue One ahead.

In the second Darth Vader scene in the movie there was a shootout/massacre of rebels, but I do not exactly understand one moment there, when it looks like he shoots a laser bolt with his palm. A video online can be found of that scene of which I made three screenshots. I wondered that maybe he was able to pull Kylo-Ren-Bolt-Catch-Trick, but couln't find such frame in the video.

What exactly happened there? 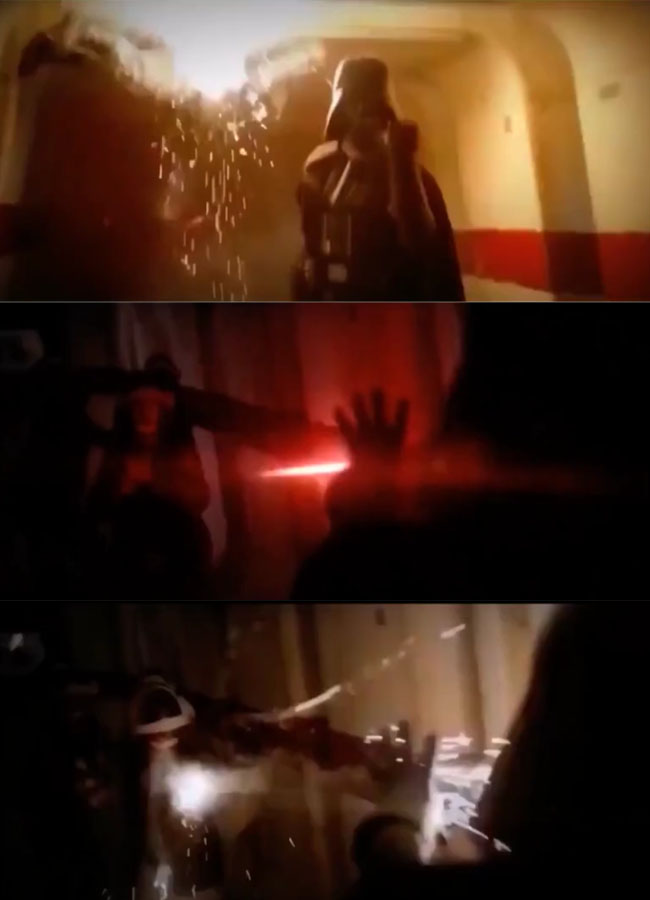 It was almost certainly a variation on the "Bolt-Catch-Trick". It happened quite quickly, but it clearly seemed to be a deflection of a blaster bolt back into the ranks of the defenders.

Nothing against Kylo (he's a total freak and I mean that is the best possible way!) but at this stage of the game he's nowhere near as powerful as Darth Vader was in the original Star Wars, so that kind of use of the force would not be beyond Vader's powers.

Notice the blaster marks on the wall, the cloud of smoke and sparks.

It has nothing to do with Kylo's frozen bolt trick.

We have seen that force users frequently gesture while invoking their force powers;

Now let's consider the clip in question, with the cool stuff beginning around 50s in:

To start, he swats a few blaster bolts aside with his light-bat, sending them back toward the rebels. At about 1:05 he gestures at one of the soldiers and with a twisting crushing gesture force-slams him into the ceiling. He maintains his closed fist - and the guy stays on the ceiling - until about 1:10 when he releases his "grip" - at exactly which point ceiling-guy starts to fall - in order to stretch out and deflect an incoming blaster shot with that hand. He then makes a reaching gesture, disarms whoever's left, and proceeds to, in the vernacular, "whale" upon them.

Back to the gesture in question, the editing and framing in the scene make it clear that the intention is to show the closed fist gesture is absolutely connected to the fate of ceiling-guy, and has nothing to do with "catching" blaster bolts.

Not the answer you're looking for? Browse other questions tagged star-wars rogue-one .

9
Disney Research Medusa quoted in the end credits of Rogue One about "teeth"?
15
Which of the previous Star Wars films does one need to watch before Rogue One?
11
Is Darth Vader's castle on Mustafar in Rogue One?
9
Was this Rogue One love story originally intended?
4
Were any scenes in Rogue One filmed in Tikal?
23
Was Carrie Fisher's voice used in Rogue One?
14
Why did Vader dislike Krennic?
0
Why did Rogue One have such an abrupt tone shift?
30
What is this statue in Star Wars Rogue One?
6
Why did Darth Vader not try stopping the space shuttle at the end of Rogue One?