Why didn't the plane crash despite its cockpit having a big hole?

In one scene of Airport 75 (1974), the stewardess tries calling the tower, but you can see there is a big hole by the copilot seat.

Why didn't the plane crash even though its cockpit had a big hole?

This might be a better fit over at Aviation..but the answer is... "it's the movies".

Also, depending on the altitude as long as they can breathe (as indicated by the lack of oxygen mask) and the plane is still capable, it can fly...not very well but it can still fly.

In the case of Airport 75, the smaller aircraft only impacted right above the co-pilot seat. It didn't damage any required surfaces/engines so that the aircraft couldn't fly, it was just that there was no-one left on board who could pilot it.

As for the damage, aircraft have suffered much worse and still made safe landings.

A classic example is Aloha Airlines 243

Aloha Airlines Flight 243 (AQ 243, AAH 243) was a scheduled Aloha Airlines flight between Hilo and Honolulu in Hawaii. On April 28, 1988, a Boeing 737-297 serving the flight suffered extensive damage after an explosive decompression in flight, but was able to land safely at Kahului Airport on Maui. There was one fatality, flight attendant Clarabelle "C.B." Lansing, who was ejected from the airplane. Another 65 passengers and crew were injured.

The safe landing of the aircraft despite the substantial damage inflicted by the decompression established Aloha Airlines Flight 243 as a significant event in the history of aviation, with far-reaching effects on aviation safety policies and procedures. 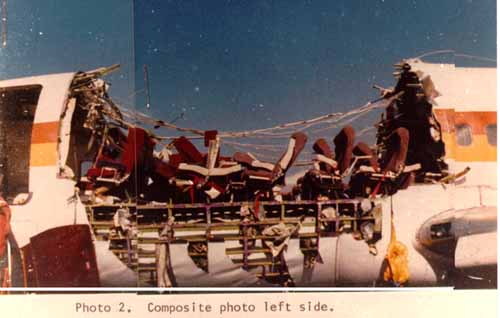 Not the answer you're looking for? Browse other questions tagged plot-explanation airport-1975 .

14
Why has the Moonraker Shuttle Carrier Aircraft crashed in the Yukon?
11
Are there any guides to the timeline of Donnie Darko?
1
Is there a plot hole or deleted scene in the film?
6
Why weren't the Birches also being charged?
10
How could Ryan land in New York in early morning?
2
On Dexter, is her murder actually depicted?
6
Why did Collins not eject his seat when his plane was about to crash?
58
In the “300” movie, in the final battle, Why didn't Leonidas kill Xerxes?
0
How was Abraham Whistler still alive in Blade II?
5
How did a zombie get onto the plane in World War Z?