Are there any guides to the timeline of Donnie Darko?

I have the basic understanding that the entire plot to Donnie Darko revolves around time traveling. As far as the ending is conceded, you may have various interpretations of what actually happened. The Director's Cut does dive into the book on time travel a bit but leaves me wanting a better explanation for what we see on screen. So what are the common theories to Donnie being dead or alive in both prior to the first plane engine crash and the second one seen in the final scene? Is that enough to understand the overall timeline (which is very complex and super confusing).

There is a total of 2 timelines that we observe in Donnie Darko.

The primary timeline, is the one we see at the beginning of the film, starting from Donnie waking up in a random location, biking his way back home. We continue seeing this timeline until the night he first sees Frank.

It is in the next few hours after this encounter, that the Tangent Universe is created. This is due to Donnie not being in his bed when the jet engine hits his room. He is meant to die in this encounter due to some unknown rules of the Universe, better explained in the book. (I think even the book mentions that this can occur for unknown reasons).

During the rest of the film, we are presented the Tangent Universe until the end of the film, when the World is about to end. Donnie summons a portal to lead both himself, and the jet engine back into the Primary Universe, the same night that he left his bed to see Frank for the first time.

It is when we see him start crawling into his bed that we are back in the Primary Universe until the end of the film.

I think it is a mistake to take the events of Donnie Darko literally, or to look for a logically consistent timeline or timelines.

There is a key extra scene on the DVD, in which Donnie is having a conversation with his father and says, "Dad, I'm crazy." Not sure why this was omitted, but it strongly supports the interpretation that the film shows Donnie losing his mind -- as do all the included scenes involving Donnie's psychiatrist, who recognizes what is happening to Donnie.

Indeed, Donnie's experiences in the movie are textbook symptoms of schizophrenia:

-he feels increasingly separated from family, friends, and peers

-he thinks he can see into the future

-his fantasies -- like outing Patrick Swayze's criminal character, or (ahem) saving the universe -- put him in white-knight, savior-type roles

-to him, the logic of the whole thing makes perfect sense, but to anyone else, it is beyond comprehension

Personally, I think part of the genius of Donnie Darko is that -- just like many real-life schizophrenics' hallucinations -- Donnie's fantasy almost starts to make sense if you strain to understand. But ultimately it only really makes sense to Donnie.

Not sure if this is going to help: 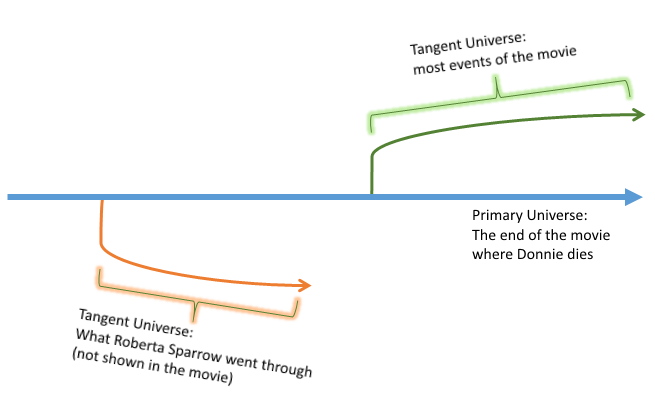 In the Tangent Universe (green) - Donnie is alive and Gretchen and Frank die.

In the Primary Universe (blue) - Donnie dies and Gretchen and Frank don't die.

His being alive would not cause any of the events from the Tangent Universe to happen again. Yet he doesn’t leave his bed. He makes peace with himself and chooses death. Perhaps he feels his purpose was to restore the balance to the universe and that he has served his purpose and is ready to die. He also knows what Roberta Sparrow has become because of being the Living Receiver, a paranoid old lady. Maybe that would be the fate of Donnie as well. Perhaps he feels dying is better and so he does.

It appears that the film tells the following story:

Originally there was only one Universe - the Primary Universe, where all mankind was living.

At some point in time an "Incident" had happened "when the fabric of the fourth dimension became corrupted and a Tangent Universe was created. There is no indication in the film when this Incident had happened. It may have happened early in the beginning of the film, or at some point prior the events that the film starts with.

Donnie is not aware of his task and his abilities and he discovers them as the film progresses.

People who live around Donnie work as the Manipulated Living, unconsciously assisting Donnie in different ways in his task of returning the Artifact to the Primary Universe.

In addition, Donnie is having visions of Frank that also provide some guidance. In the film Frank is a boyfriend of Donnie's sister Elizabeth, who made himself a rabbit costume for Halloween. What Donnie sees in his visions is not actions of the actual Frank who came back through some sort of time travel, but rather hallucinations that occur because of Donnie's ability of foresight as the Living Receiver. As the Book reads, the Living Receiver is often tormented by terrifying dreams, visions and auditory hallucinations during his time withing the Tangent Universe.

Donnie's girlfriend Gretchen and the actual Frank unconsciously work as the Manipulated Dead. Their task is to create an Ensurance Trap that will leave Donnie no choice but to return the artifact and thus to save all mankind.

Just before Donnie travels from the Tangent Universe he says: "Going home", and laughs. Then, in his letter to Roberta Sparrow he says: "I hope that when the world comes to an end, I can breathe a sigh of relief, because there will be so much to look forward to". Then we see Donnie laughing in his bed in his home. So, he was glad that he had accomplished his task and saved the mankind. Then he peacefully turns on his side smiling. This suggests that Donnie did not expect the jet engine to crash on him in the Primary Universe, he expected to live on, and thus his act was not a self-sacrifice.

As to all other people, as the Book reads: "when the Manipulated awaken from their Journey into the Tangent Universe, they are often haunted by the experience in their dreams. Most of them will not remember. Those who do remember the Journey are often overcome with profound remorse for the regretful actions ..."

In my view - a very illogical story and an overrated film.

Donnie Lives At The End

There is still some confusion despite decades: Donnie Darko is an Ouroborous plot. The tangent universe explains how to untangle most of it.

However the Director plays 2 sleight of hand tricks. You have to keep your eye on the missing ball.

What get transferred between universes: (1) the Deloroean. The jet engine. Tangent Donnie Darko, Gretchen corpse.

Why did Donnie Prime have to die? Because he is now a time travel duplicate. His continued existence could cause another tangent, or worse: destroy the entire universe if the two Donnies meet?

How do we know this? Because the director explicitly showed this scenario in his next movie (spoilers) Southland Tales. [in order to explain DD you must see or ruin the mystery in ST]

So Donnie Tangent lives and we are never shown him again

Yes, this is the other sleight of hand, creating the mystery of an Ourobourous.

What about the 'Time Unwinding scene'

Good Question. Ironically when understood properly its proof Donnie travels to the other universe.

No one from the tangent universe transfers to Prime. Time unwinds outside the wormhole to the point of its destination. Everything unzips. What is inside the wormholes is duplicated at entrance while spacetime unzips around it. This is why there are two jet engines. 2 Deloreans. 2 Donnie Darkos.

Further Proof: the final piece of the puzzle was the "Future Timeline" on the movie website. Someone ( Donnie) is acting with knowledge of the tangent universe. Donnie wrote the letter to Roberta Sparrow he is narrating at the end. We were shown him writing part of it. He knows she is dead. ...but the letter still gets delivered to Roberta Sparrow by Christmas in prime universe. She is waiting for this letter from Donnie so she knows she succeeded and can die in peace.

In the meantime the child molester, Jim Cunningham house is set on fire, exposing him, just like Donnie did in the tangent universe. He confesses and is arrested.

Why is Donnie Laughing?

The actual hidden mystery is where the Delorean ended up.

Not the answer you're looking for? Browse other questions tagged plot-explanation time-travel donnie-darko .

5
Where did the jet engine come from in the movie Donnie Darko?