Why does the spotlight slowly appear when they started talking?

I'm talking about the following scene in The Age of Innocence:

When those two started talking, a spotlight slowly appears on them, and we only hear their voices, and nobody else's. Why is this?

This is a fairly common tactic that you'll actually see in a lot of films - muting/otherwise downplaying the background chatter that you'd normally hear in a certain scenario (e.g. in a restaurant, at a party, etc) so that the film (and its viewers) can focus on the characters and conversation(s) that are actually important/relevant. You've probably seen/heard it used in a lot of other movies and TV shows without even realizing. One particularly prominent example of this tactic comes in the opening scene of The Player from 1992.

Obviously, in real life, you'd be getting a lot of background noise (and even hearing other simultaneous conversations) while listening to many of the conversations presented in this opening shot. And with some of the conversations shown in the scene, you might not actually be able to hear the speakers at all from the vantage point that the camera gives you. But the film isn't there to make you focus on the irrelevant background conversations or be deterred by the fact that there's a window between you and the speakers, especially because the film isn't supposed to be a precise imitation of reality. So instead of letting complete realism get in the film's (or its audience's) way, The Player - or, in your case, Age of Innocence - is going to make sure that you are able to hear the information/plot-relevant conversations that it wants you to hear, regardless of (and sometimes deliberately contrary to) any sense of realism. And while some filmmakers and film editors are better than others at making smooth/seamless transitions into "unrealistic eavesdropping on a particular conversation" moments, most filmmakers trust that their audience can and will suspend disbelief about certain things that may not actually happen in real life, but that don't detract from the internal logic of the movie.

As far as the "spotlight" in the particular scene you're looking at, it can safely be assumed that this is just the film's visual equivalent - perhaps purposefully stylized - of drawing focus to specific characters/a particular conversation. Much the same way that most TV shows and movies will have their focus on the character(s) who are speaking or whose reactions they want to emphasize, while leaving their background out of focus (something that also has its practical purposes in terms of cameras and camera lenses, etc.). Take, for instance, this shot from the Star Trek: Voyager episode I'm watching (Season 2, episode 18, "Death Wish"): 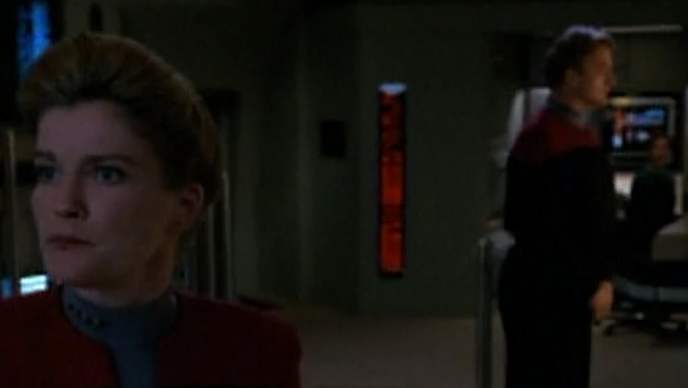 The image quality of the screenshot I took on my computer is pretty awful, but you can still tell that Captain Janeway (in the foreground) is in focus, while Q (the red-and-black-shirted man in the background) and the seated crewman behind him are very, very blurry. That is because, in the moment, your attention is supposed to be drawn to Captain Janeway - she's the important person to watch right now, not Q or Random Ensign Juan (or whatever the extra's name is). It seems fairly clear that the use of lighting in the scene you reference from Age of Innocence is meant to create the same effect as the camera focus in this scene from Voyager.

Not the answer you're looking for? Browse other questions tagged film-techniques cinematography the-age-of-innocence .

56
Do the actors really go nude in the shooting of the movies?
11
Does Alex really hold on his breath while he is beaten up by Dim and Georgie
6
Are time lapse shots of growing plants done in a studio or at the particular places on earth?
18
How did they film the bridge scene in Sorcerer?
4
Did two Great Danes really fight a tiger?
2
What is the film technique for someone breaking into pieces?
23
How is clear dialogue recorded in noisy scenes?