Did the tobacco industry fund MIB 1 and 2?

Ask Question
Asked 10 years, 2 months ago
Modified 4 years, 4 months ago
Viewed 3k times
29
Want to improve this post? Provide detailed answers to this question, including citations and an explanation of why your answer is correct. Answers without enough detail may be edited or deleted. 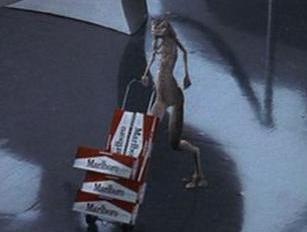 I just saw Men in Black 3 and enjoyed it immensely. There was practically no smoking in the film. In MIB 1 and 2, there was a lot of smoking and tobacco product placement. Did the makers of the films get any payoff from "Big Tobacco"?

Officially, Men in Black II received no funding, but some anti-smoking groups claim secret payments are regularly made by tobacco companies to filmmakers.

Men in Black II was made after the 1998 Tobacco Master Settlement Agreement, originally between the four largest United States tobacco companies (including Marlboro manufacturer Philip Morris USA) and the attorneys general of 46 states, which included restrictions on youth targeting:

According to Smoke Free Movies, the makers of Men in Black II didn't receive any payment for showing Marlboro, but they suggest there are secret agreements and payments made by tobacco companies to filmmakers.

From the article, "Superman II took $43,000 to push Marlboros at kids. Why would Men in Black II do the same thing for free?" (pdf):

Of all products featured, we are asked to believe the world’s most heavily-advertised cigarette brand, Marlboro, appeared for free: no cash, no favors of any kind.

Why would MIIB executive producer Steven Spielberg indulge a director promoting the Marlboro brand to kids?

Why would director Barry Sonnenfeld feel compelled to show his cartoon-like characters gleefully smoking up a storm?

Why would Sony Pictures and other high-proﬁle brands risk their reputations and millions of promotional dollars linking themselves to a movie that favors the most despised industry in the world — Big Tobacco?

They're also asking for films to certify no pay-offs at the end of films, with a statement:

No person or entity associated with this film received payment or anything of value, or entered into any agreement, in connection with the depiction of tobacco products.

I recently watched Gran Torino (2008), which showed unbranded smoking, and it carried such a certificate at the end of the credits.

I have no reason to believe there was any behind-the-book payoffs or endorsed deals promoting the higher use of the tobacco products in the first film over the 2nd. I would recommend, though, taking the years they had been released into account. Within the last 15 years alone anti-smoking awareness has increased dramatically and would effect the rating of the 2nd movie much more then the rating of when the first movie was released and viewed. I believe this is why there is such a dramatic difference that you are seeing regarding the use of the tobacco products.

I think it is odd that anyone could believe the tobacco industry doesn't pay dearly to keep cigarettes in movies. I personally believe they pay the lead actors salary when they smoke. This could account for why many lead actors received 20 million per movie. Why would different production companies pay lead actors the same amount of money if there wasn't a reason. I believe tobacco is the reason. When businesses pay for product placement, they also specify there will not be a similar competitor's product in the same movie. So isn't it funny that in some movies such as Independence Day, you only see prominent cigar smoking and no cigarettes. This strongly looks like big money is at stake. Lucille Ball hated the tobacco industry for having the rule that you will smoke in every scene in the I Love Lucy series as her husband Desi Arnaz died from smoking. Lucille's production company, Desilu, went on to produce the original Star Trek series and guess what... no smoking.

Not the answer you're looking for? Browse other questions tagged product-placement men-in-black men-in-black-2 .

16
Why does Arrow have so much Microsoft product placement?
9
Were there any legal issues due to McDonald's references?
16
Why is Applebee's in so many movies?
3
How did Newton survive after what happened to him in Men in Black 1?
1
Why do so many movies feature the Dell Rugged laptop?
1
Product placement in Thieves Like Us?
5
What was the point of wiping James's memory?