In this scene from Tom and Jerry: The Fast and the Furry we see some weird stuff.

Below a few screenshots to help locate it: 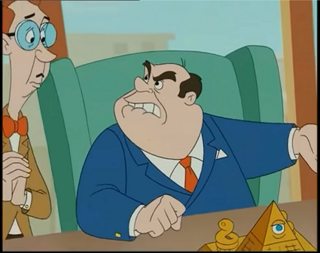 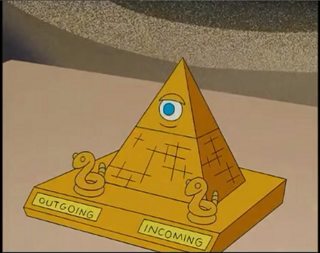 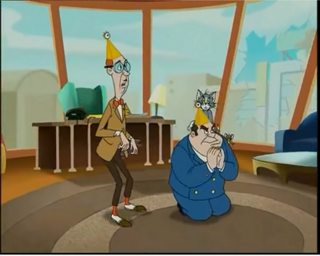 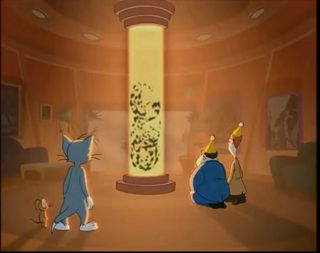 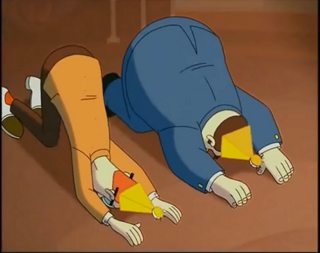 I can't understand what's happening in this scene. How to interpret this scene?

They're satirizing Hollywood and Hollywood producers by depicting them as a bizarre, Freemason-like cult that takes its orders from the devil.

In the scene, a Hollywood producer (in the blue suit) is rejecting the idea of letting animals be contestants on his TV game show. As he is rejecting Tom and Jerry's petition, an object on his desk that closely resembles a Freemason symbol rings like a telephone and the producer and his assistant don hats similar to the pyramid/eye Freemason symbol and get on their knees to answer a call from "the President of Hollywood." When the President of Hollywood's image materializes inside a strange cylinder-like aparatus, he has the outline of the devil.

The scene is poking fun at Hollywood in general and producers specifically by basically saying that they are all part of some kind of unholy, occultist cabal and they take their orders directly from the devil. This is also possibly intended to poke fun at people who criticize Hollywood productions on religious grounds, and conspiracy theorists who hypothecize that Freemasons are an all-powerful group with murky, sinister motivations.

4
What is happening in the last scene?
8
Did Tom ever catch Jerry?
2
Mission to Mars beginning meaning
8
How does Kris realize what's going on?
6
Is there a meaning behind the dripping sink at the end of the movie?
6
How does Jerry Lundegaard's GMAC loan scheme work?
12
What does the coin flipping before dying mean?
1
How does courier flaps mistakenly ships Jerry to Birdperson on S2E10
0
Dissecting and interpreting weird MTV commercial