In s08e03 we see Melisandre and Arya meet for the second time after Season 3 when Melisandre said to Arya back then:

"I see a darkness in you. And in that darkness, eyes staring back at me. Brown eyes, blue eyes, green eyes. Eyes you'll shut forever. We will meet again. "

I also believe that Brown Eyes referred to Walder Frey who was also killed by Arya back in Season 6.

But where do the Green Eyes reffer to? I don't remember her executing any important character with green eyes. My guess is that:

they reffer to Cersei. Do you think that the prophecy implies that she is going to bring her hateful enemy down somehow?

Some of the possibilities are Littlefinger, Cersei, and Jaime.

The obvious answer is Cersei Lannister, as Arya has been out to get her since Season 1 for her role in Ned Stark's imprisonment (which ultimately led to his death) and more tragedies on her house. The Queen of the Seven Kingdoms has green eyes, both in the A Song of Ice and Fire books and the show Game of Thrones.

This does seem likely but there are the other possibilities, like Petyr.

The prophecy may also refer to Littlefinger (a.k.a. Petyr Baelish), whom Arya already killed in Season 7. He's said to have gray-green eyes in the books. (In real life, however, actor Aiden Gillen has blue eyes.) Maybe Arya has already fulfilled her prophecy and sealed the deal with the Night King as her victim.

The final considerable option is that it may refer to Jaime and Cersei.

As Cersei's twin brother, Jaime also has the green Lannister eyes, at least in the ASOIF books. Some fans theorize that Arya will kill the Kingslayer and then use his face to kill his sister. That idea also aligns with the valonqar theory Cersei received as a child, which says she'll die at the hands of her little brother. 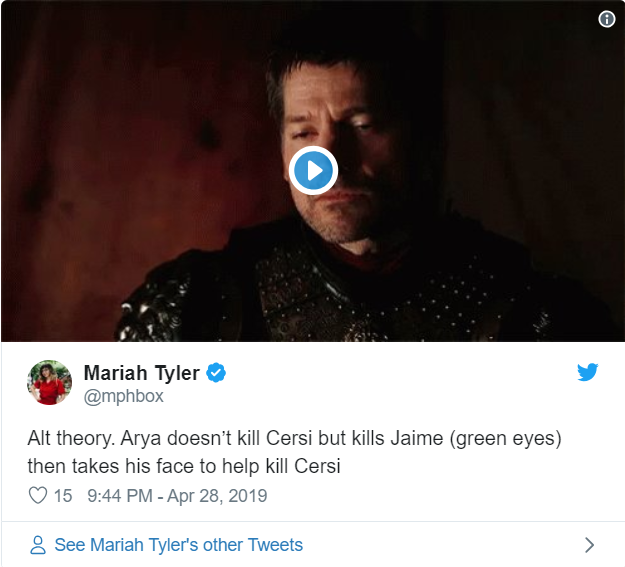 Hopefully, we will receive some confirmation later in the series.

3
Who was the "green-eyes" that Arya was supposed to murder?

1
Who is the animal statue of in the Game of Thrones Season 8 Teaser Trailer?
62
Point of the Dothraki's attack in GoT S8E3?
8
Have all of the 3 Game of Thrones twists been revealed?
23
How did Arya survive this confrontation unscathed?
4
Did Melisandre really go back to Volantis?
1
Was there any indication this would happen, prior to season 8?
22
Did winter finally come to Westeros?