Was there any indication this would happen, prior to season 8?

In Season 08 there are a few hints it will be her. Such as when she sneaks up on Jon by the Wierwood tree, the fact that Berric dies (for real this time,) saving her, as well as a conversation where Melisandre quotes herself from S03Ep06 in reference to "closing blue eyes".

The fact that Melisandre mentioned "closing blue eyes" earlier in the series may be considered foreshadowing, but it seems a bit forced and not super likely. Even if it was, were there any other indications?

Is she Deus Ex Arya? Or were there clues that we could have seen to figure it out? I'm looking for examples of foreshadowing that watcher's could have noticed to help them determine it would be her.

We knew that the dagger would be involved because they showed us Sam reading this book: 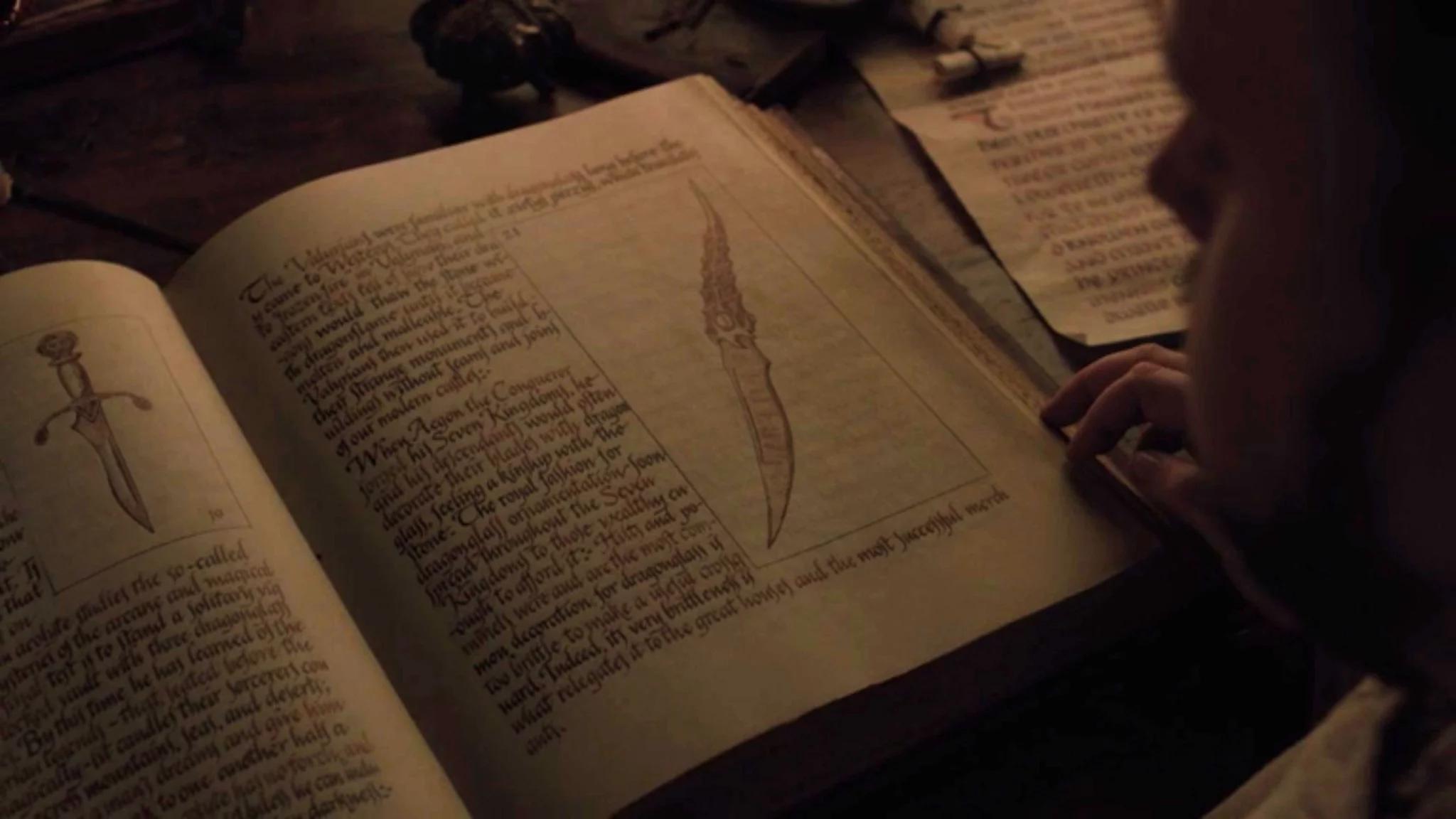 As soon as Bran gave the dagger to Arya she became the most likely person to successfully complete this task.

She LITERALLY trained for many seasons to be an elite assassin in the Faceless Men that LITERALLY worshiped the Many Faced God aka The Lord of Light aka The God of Death.

I already answered if Arya qualifies for being Azor Ahai

Let's argue for a moment on potential candidates to kill the Night King: Jon, Daenerys, Jaime (being Kingslayer), Brienn (together with Jaime tie-ing up Nissa Nissa if you want to take prophecies. I don't care about prophecies in GoT).

After the battle began, it was pretty clear that Jaime and Brienn were only soldiers in the battle because of the strategy used by the Night King of letting the Wights loose on the Army of the Living and keeping himself and other White Walkers far back.

So, only Jon and Daenerys, on dragons are left. Daenerys tries Dracarys on Night King and it doesn't work. She can't do anything more so she's out and we are left with Jon.

When the Night King crash lands and is making his way up to Bran, Jon seeks him out by running behind him, but the Night King senses this and just resurrects some more wights for Jon to fight through and goes on his mission.

The Night King is very clear in his strategy. Use as many Wight soldiers in this fight for as long as you can and keep the White Walkers at a fair distance from the actual fight.

We see in earlier seasons that White Walkers are not skilled fighters. They never had to be. Their weapons were indestructible and steel blades or fire couldn't harm them. But Jon easily killed a White Walker at Hardhome with Valyrian Steel and Night King saw it. Another White Walker was ambushed and killed by Jon and co beyond the Wall. Another was killed by Meera through a spear from long distance.

So, Night King knows that White Walkers are now vulnerable. He has a clear strategy of using only Wights. He has seen Daenerys beyond the Wall and knows that her dragonfire would not be effective.

So, to sum up, he avoids one-on-one fight with Jon as well as his other White Walkers because he knows Jon will kill them and him in single combat.

So the attack on the Night King had to be a sneak attack. It had to be something he could not predict or prepare for. So, Arya was the only prime candidate to kill him.

Theon, instead of charging, could have just aimed the spear at the Night King but he was a fair distance away and could avoid it.

So, Arya killing the Night King makes perfect sense because she trained to be an elite skilled assassin who could sneak up on anyone without making a sound.

Arya is not the Deus Ex Machina or Mary Sue as many fans choose to believe. She was the only skilled person among the living to kill the Night King

There were indications that Arya was important to the storyline, but there weren't any "commitments" that would have locked her into that role.

We know she's important because of various reasons. Melisandre's predictions were the most obvious, but there were other subtle indications: her chain of "protectors" (Yoren, Tywin, Jaqen, The Hound, Brienne), and her training as an assassin.

But before S08E03, Arya was just one of many that were "in the running". Jon Snow could have been the one without contradicting anything that we'd already seen in the story.

I think that is the biggest clue that she is going to be the one. We've known for a long time that the Lord of Light has been keeping Beric alive, and nothing before that point seems like a significant enough reason for the Lord of Light to do that.

There was at least one foreshadowing event, at least two significant clues, and other significant indicators.

We see foreshadowing on how the Night King was going to die when Arya Stark duels (trains with) Brienne of Tarth. Please see this clip of the duel/training.

Now please see this clip of the Night King’s demise.

The two are identical in the sense that Arya’s opponents both fall for the knife-is-in-the-other-hand trick. The only thing that prevents us from saying “If we dressed Brienne in Night King clothes we would have the conclusion of the series” is that Brienne had a sword and Arya used the other hand.

Arya developed the highly valuable habit of going straight for the jugular, planning in advance to make that possible. She did precisely that with the Knight King, though much of it was in haste and occurred off camera. Here are two examples of going for the jugular.

Please understand that Arya was not joking – at all. She laughed with the others because she saw the humor in the irony as well as anybody else.

Another clue is the demise of Walder Frey and his House. Arya would make sure that “Winter came for House Frey”. And she went for the jugular, stopping only to gather props (Black Walder’s and Lothar’s deaths are the equivalent of having to go through the skin to get to the jugular).

Her elaborate plan only concluded when House Frey was no more.

Her plan was very dangerous, and complex to the point where crucial events needed to come together in sequence. Important to note here is that she alone planned it, she alone executed it, and perhaps most importantly, she alone accepted and bore the high order risk of failure and death.

There are indicators that Arya has a significant role to play, and has developed the skills to make it happen.

We learn here that Arya bested a worthy opponent by using complete darkness. We also see that it at least only partially appeared that the she was running in a panic. To our surprise, we see that Arya had a backup plan to come out on top.

Jaqen H’ghar prepares Arya and finally sends her on her way. Please note Jaqen’s subtle smile and nod just before Arya leaves (and just after she says “A girl is Arya Stark of Winterfell, and I’m going home.”).

It’s reasonable to think that Jaqen would have killed Arya had she violated his sanctuary so badly. The smile/nod, and that Arya doesn’t mysteriously die, indicates that Jaqen has a plan that she was now ready to act on. It makes you wonder whether Jaqen planned all of Arya’s “punishments” to train her for her now-revived intentions.

"I know death, it's got many faces, I look forward to seeing this one" - Arya Stark

Arya's through line really starts all the way back to season one, as her journey is a story about a girl facing death and one of Death's many faces is the Night King and White Walkers, but the another is loss of her father (and eventually other family members)...

In season one she's introduced to a Braavosi man by the name of Syrio Ferell, who becomes her "dancing" instructor. Syrio teaches her two very important lessons.

Arya looses Forel and her father at the same time (both are murdered) and this is what truly starts Arya's journey into becoming the person she's going to be. She ends up meeting a Faceless Man going by the name "Jaqen H'gar" and in exchange for killing three men and freeing him, he says he owes her three lives.

It's revealed that the Faceless Men derive from the Isle of Faces in Braavos, the same region and free city in Essos that Forell was also from. Eventually Arya decides to go there and learn their ways...

The Faceless Men are a assassins guild who use magic that all stem around notions of death. They use the faces of the dead to transform themselves into "other people", basically impersonating the deceased in physical appearance, in order to kill other people!

The Faceless Men worship death, whom they believe is the only god. The cult is actually a syncretic religion; its followers believe that Death is unknowingly worshiped by devotees of all the religions in the world, simply under different names. Every religion either has a god of death (in polytheistic faiths), or has a god with dominion over death (in monotheistic faiths). The Faceless Men believe that all of these gods are simply different aspects, or "faces", through which Death has revealed Himself to humanity - hence they formally refer to their deity as "the Many-Faced God".

Their belief system revolves around believing in one true God (or Gods), the God of death (or The Many-Faced God) by becoming masters of it.

It's for this specific reason, one might be able to see Arya's role in killing the Nigh King coming, since he has been coined by Sam (and the executive producers) in being a personification of Death coming to kill everyone on the planet. The Faceless Men are like a microcosm of the Night King/White Walkers, except that they prepaired Arya for being able to deal with it.

Bran Stark: Yes, he will. He'll come for me. He's tried many times before, with many three-eyed ravens.

Samwell Tarly: Why? What does he want?

Bran Stark: An endless night. He wants to erase this world, and I am its memory.

Samwell Tarly: That's what death is, isn't it? Forgetting, being forgotten. If we forget where we've been and what we've done, we're not men anymore, just animals. [to Bran] Your memories don't come from books. Your stories aren't just stories. If I wanted to erase the world of Men, I'd start with you.

9
Did this character even qualify for being Azor Ahai or The One Who Was Promised?
7
What was the plan that Daenerys abandoned?

3
Is there any evidence to clarify Jon Snow's fate?
20
Was there any hint about Jon Snow's parentage before S06E10?
29
Who is the third man that Sandor Clegane is referring to?
16
Why does this happen with Longclaw?
28
Why did Benjen Stark allow this to happen to him?
3
Why did this happen to Eden in the episode "Postpartum" (season two)?
18
Did Nebula know what would happen?
17
What is Bran doing in S08E03?
47
Did this character show any indication of wanting to rule before S8E6?