Why is there a crown on Diana's head?

In the Christmas special episode of Chilling Adventures of Sabrina 'A Midwinter's Tale' we see Sabrina's mother Diana. And she helps Sabrina save the baby from Gryla.

Diana was wearing a crown during this scene. Why was there a crown in her head? What does that mean?

Unfortunately, Gryla catches wind of Letitia and wants to take her back to the mountains as well. After all, it’s not as though Zelda’s claim on the child is legitimate. To settle the dispute, Diana appears with a glowing crown (in a nod to Saint Lucia/Lucy) and tells the women to play tug-of-war with Letitia. Whoever’s the strongest will get to keep the baby (or what’s left of her).

This is also somewhat explained in her dialogue:

The saint Lucia took my right hand, the demon Lucy took my left. I wear their crown on this, the longest of nights, and until the dawn remakes the world, I speak with their authority. 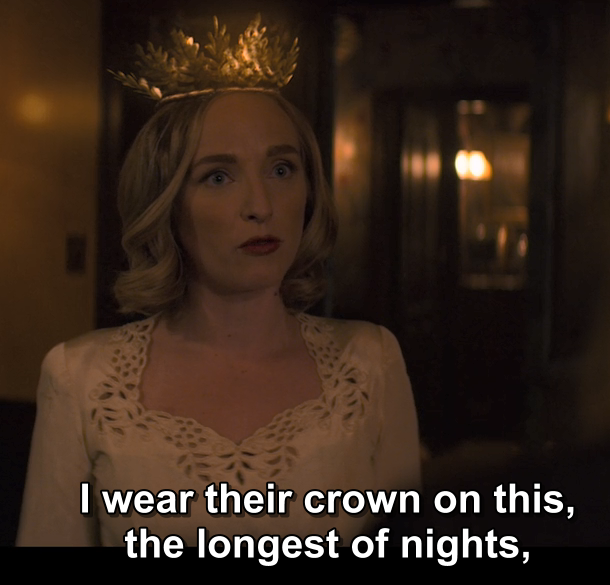 Saint Lucia's life also has a parallel to Diana's own life:

Sabrina’s mother Diana’s spirit shows up in a white dress and a gold crown and says she will decide who deserves the babe. Diana says she has the mother’s right to decide as she lost her child who called her here with “guides both mortal and infernal.” She claims authority over the decision as to who deserves the child as Saint Lucia took her right hand and a demon Lucy took her left and “she wears their crown on this longest of nights.” Interestingly Saint Lucia was a martyr who had consecrated her virginity to God but was forced by her mother to marry a pagan, in a parallel to the mortal Diana marrying the warlock Edward Spellman.

For an explanation of the link to saint Lucia, it's off to Wikipedia we go:

Lucy's Latin name Lucia shares a root (luc-) with the Latin word for light, lux. A number of traditions incorporate symbolic meaning of St. Lucy as the bearer of light in the darkness of winter, her feast day being December 13.

Lucy's feast is on 13 December, in Advent. Her feast once coincided with the Winter Solstice, the shortest day of the year, before calendar reforms, so her feastday has become a festival of light.

This is particularly seen in Scandinavian countries, with their long dark winters. There, a young girl dressed in a white dress and a red sash (as the symbol of martyrdom) carries palms and wears a crown or wreath of candles on her head.

Not the answer you're looking for? Browse other questions tagged plot-explanation the-chilling-adventures-of-sabrina .

4
Why is Lucifer's mother behaving so strangely recently?
11
Is Prairie an unreliable narrator?
7
Did Linus Larrabee really love Sabrina?
5
The Maze inside the head of the Host
5
How is this character resurrected in 'Chilling Adventures of Sabrina' without giving a life for life?
0
Why was Katniss Everdeen wearing her arena outfit in this scene?
7
How did Bellamy's mother hide the fact that she was pregnant, for so long?
3
Why does this happen in the end of Suspiria?