In the original Blade Runner, I notice photographs really have significance for Replicants. Both for example Leon having photographs in his drawers when Deckard goes to investigate his apartment and Roy asking if he has his photos with him. Same goes for Rachael when she reflects upon Deckards various photos on his piano. So my question is:

Question 1: What is the Replicants fascination with Photos?

Question 2: What is written on the back of the one photo Rachael gives to Deckard? Does it have any significance? 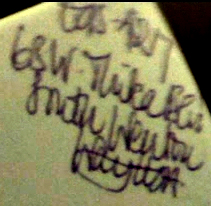 Nexus 6 Replicants don't have implants, they are aware of their condition as artificial beings and the only memories they have are the ones they make in their short lives. So they become obsessed with registering memories.

Leon's photos had to be as phony as Rachel's

but finds out later that they're not fake, and where taken by Roy's group, probably by Leon himself. They are the reason Leon goes back to his apartment.

Since their life span is so short and they don't have a past, they cling to their precious few memories, and as they'll be lost soon, they're a proof of their life experience.

All those memories will be lost in time

To Rachel they have an added significance, because she does have implanted memories of a childhood, and her attachment to the photos is not only for the past they represent, but as a reaffirmation of her humanity that she fears not having. As Tyrell states earlier when Deckard says she doesn't know:

The writings in the back of the photo show how careful Tyrell was when giving Rachel a past, as Deckard thinks "Tyrell thought of every detail", and why Rachel chose to carry it.

The photos are also a source of suspicion for the viewer, before the Final Cut Edition. Seen as how Deckard's apartment is so abundant with old photos, it was another indication that he could also be a replicant.

Answer 1: Replicants need photos to keep their implanted memories fresh. This enables them to act more "human", which is a pretty nifty disguise. The Voight-Kampff test is an effective mean to distinguish Replicants, because after a certain number of questions, they start producing unsteady responses, due to blurring of memories. Hence they need photos to keep their memories unaffected.

Answer 2: The photo that Rachel had was not hers initially. It was Tyrell's niece's. So I presume the address on the back belongs to her. Just to answer your question, no, it's not important at all.

Not the answer you're looking for? Browse other questions tagged analysis props blade-runner .

18
Why did Blade Runner deviate from the source novel so significantly?
31
What does the origami represent in Blade Runner?
18
Why did Roy let Deckard live?
17
What makes Blade Runner so iconic?
10
Why does Gaff spare Rachael's life?
14
Do I need to watch Blade Runner before watching Blade Runner 2049?
14
What exactly is a Replicant?
3
Were the "friends" of Sebastian essentially small replicants or were they something else?
3
Are Nexus 6 models nearly impervious to the Voight-Kampff test, or very easy to spot?