Was the smoke in this scene accidental or a practical effect serving to depict something?

In the Star Trek: The Original Series(TOS) episode "Journey to Babel", There were several shots of an "operating room" scene, in which McCoy (DeForest Kelley) is operating on Sarek. In at least a couple of the shots, wisps of smoke can be seen rising from behind the contraption placed over Sarek. 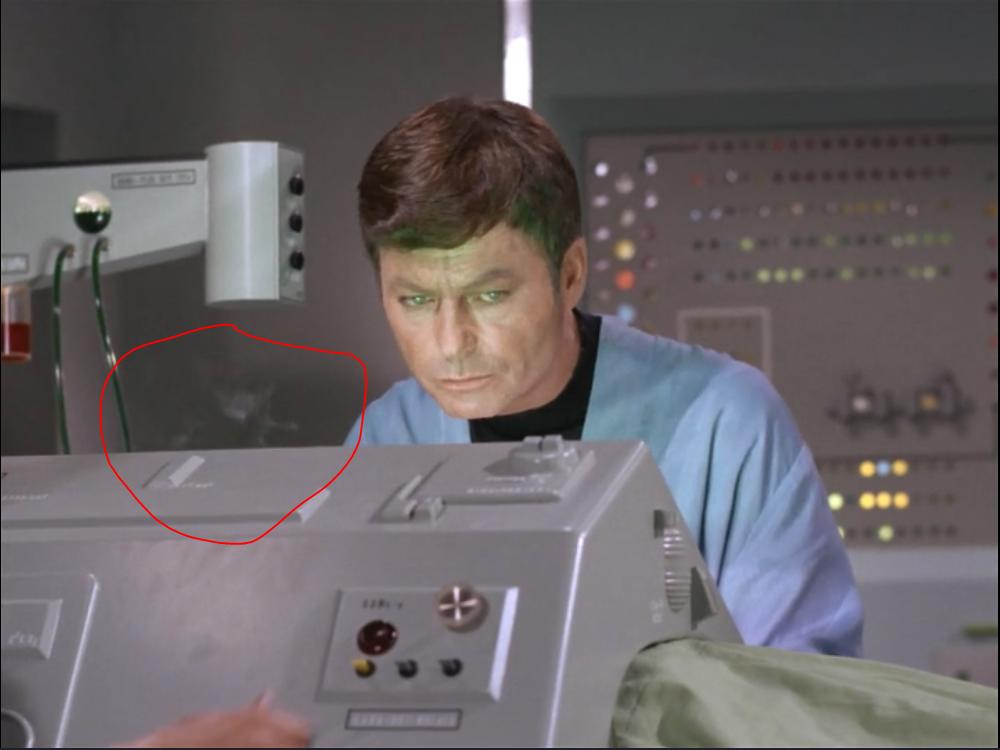 Was the smoke accidental in the shot (Kelley hiding a cigarette during takes) or was it actually a practical effect serving to depict something in the TOS universe? It seems a little too obvious to be left in as a production goof, but makes no sense as anything intentional.

makes no sense as anything intentional.

The operation being conducted on Sarek is on his heart and involves major blood transfer from Spock.

There is a process for sealing of blood vessels called cauterization

The practice was once widespread for treatment of wounds. Its utility before the advent of antibiotics was said to be effective at more than one level:

Cauterization was used to stop heavy bleeding, especially during amputation. The procedure was simple: a piece of metal was heated over fire and applied to the wound. This caused tissues and blood to heat rapidly to extreme temperatures, causing coagulation of the blood and thus controlling the bleeding, at the cost of extensive tissue damage.

So it's possible that this is what the smoke is intended to represent.

It seems highly unlikely that this is related to Kelley smoking on set and the smoke being onscreen but it's not impossible. This seems to be a constant comment without a verified source...other than "it was the 60's and they all smoked on set".

Smoking on the set is a far cry from smoking in the middle of a scene.

It's possible that the smoke is coming from the light source inside the "medical equipment" that is supposed to represent a "sterile field" but again, you would have thought that they would have taken steps to rectify that once seen.

It's much more likely that this is an intentional practical effect meant to be part of the procedure.

According to StarTrek.com it's cryogenic fog from the cryogenic surgery

Question: In “Journey to Babel,” Sarek (Mark Lenard) becomes critically ill while being transported on the Enterprise and, according to Mr. Spock, needs a “serogenic” surgical procedure on his heart to repair it. What’s a serogenic surgical procedure?

Answer: That’s a good question. Checking the script, it appears that the word “cryogenic” – which relates to very low temperatures – was mispronounced as serogenic by Nimoy. Here’s the dialogue from the script:

I’d say a cryogenic open-heart procedure is the logical approach.

As further proof that the word cryogenic was intended, the surgery that McCoy (DeForest Kelley) later performs on Sarek makes use of a “cryosurgical frame” that generates fog from condensed atmospheric water caused by the very cold temperature. (The effect was likely created by the effects team using smoke or dry ice).

hat-tip to https://www.trekbbs.com/threads/journey-to-babel-deforest-kelley-smoking.300756/ for the link

Not the answer you're looking for? Browse other questions tagged plot-explanation star-trek star-trek-the-original-series .

18
Did the fuel transform Wikus, or was it something else?
6
Why didn't Lord Coward spot the origin of the sound while Sherlock was hiding in the smoke?
8
What was the mechanic noise behind the Black Smoke Monster in Lost?
2
How is this scene pertinent to the plot?
9
In Blade Runner 2049, what was going on in this scene?
4
Is the Doctor doing anything in this scene?
0
Why was Katniss Everdeen wearing her arena outfit in this scene?
4
Was this miniature in "Requiem for Methuselah" ever used to portray the Enterprise in space?
3
How was Gustavo Gaviria able to appear in this scene?