When exactly does Guardians of the Galaxy Vol 2 take place in the MCU?

Some people say Guardians of the Galaxy Vol. 2 takes place a few months after the first one (2014), which means before Civil War. If that's the case,

How is Stan Lee telling stories to the trio of Watchers about him being a FedEx agent, which takes place in 2016 (after Civil War)?

The director, James Gunn, has confirmed that the sequel takes place 2 months after the original movie....so 2014 which apparently dates it before Civil War (but see below). 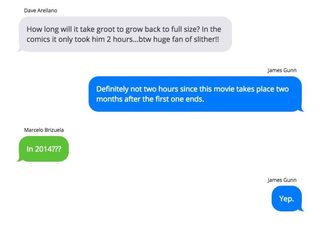 However, we don't know the dates of the other MCU movies.

Yeah, knowing that outside of the Guardians franchise, we don't necessarily always date the movies. You don't always know, we don't say, '2012, 2013...' We do in the Guardians because you do the math and 1988, and it's 26 years later. But we never say, 'Oh, this takes place in 2018, this takes place in 2017.' But it was important for the story that James wanted to tell that they're still relatively fresh in their new group.

James Gunn has gone on record to state 'only a couple of months':

Most MCU films take place at their equivalent 'time of release'; meaning the real world gaps between the films release schedule apply to the in-world chronology of the MCU.

GOTG2 is the first film to break this trend.

And yes, I know I made a mistake. People have written and asked me, and I'll own up to my mistake because Guardians of the Galaxy Vol. 2 theoretically happens in 2014 which is before [Captain America Civil War]. And Stan Lee in the movie says, ‘That time I was the Fed Ex guy,’ which is what he is in Civil War. I screwed up; I wasn't thinking. That’s all that is.

The hint is that Stan Lee is something along the lines of a nanny cam for the Watchers. And Guardians 2 is not the first movie to break the timeline as released theory.

It is my assumption that the Watchers know all and see all whether it has happened yet or not. The Watchers are an integral part of the Marvel Comic stories call What If?. In the What If? Comic books the Watcher talks about being everywhere and nowhere. He tells the stories that will , can and might happen if certain events take place in a particular order. Many of these stories take place in alternative time lines and different Marvel Universes. It is possible that even though Guardians Vol. 2 takes place before the events of Stan Lee working for Fed Ex, and the events of the Civil War, that it has been witnessed by the One True Stan Lee, who in turn tells the Watchers about it. Think of the Watchers as Celestial time travelers. They only witness, they do not interfere or persuade events they only Watch and observe. That's my take on it. Maybe I'm wrong but its a good theory.

According the Marvel Cinematic Universe Wiki:

Guardians of the Galaxy Vol. 2

Guardians of the Galaxy 2 takes place between

This would mean that in GotG2 Stan Lee hadn't been a FedEx agent and wouldn't be for nearly 2 years.

There are 3 possible explanations for Stan Lee's cameo in GotG2:

15
What happened to Earth?
4
Did Guardians of the Galaxy Vol 2 confirm that Marvel now has the rights to Fantastic Four?