Is Spider-Man: Homecoming correct in saying it takes place 8 years after the Battle of New York?

In the Spider-Man: Homecoming movie it's displayed that it occurs 8 years after the New York battle.

Is the timeline right?

Because it was supposed to occur a few months after Civil War but after 8 years template make it fall on 2020 which is 4 years after Civil War. So what is the correct timeline for Spider-Man: Homecoming?

This graphic explains it: 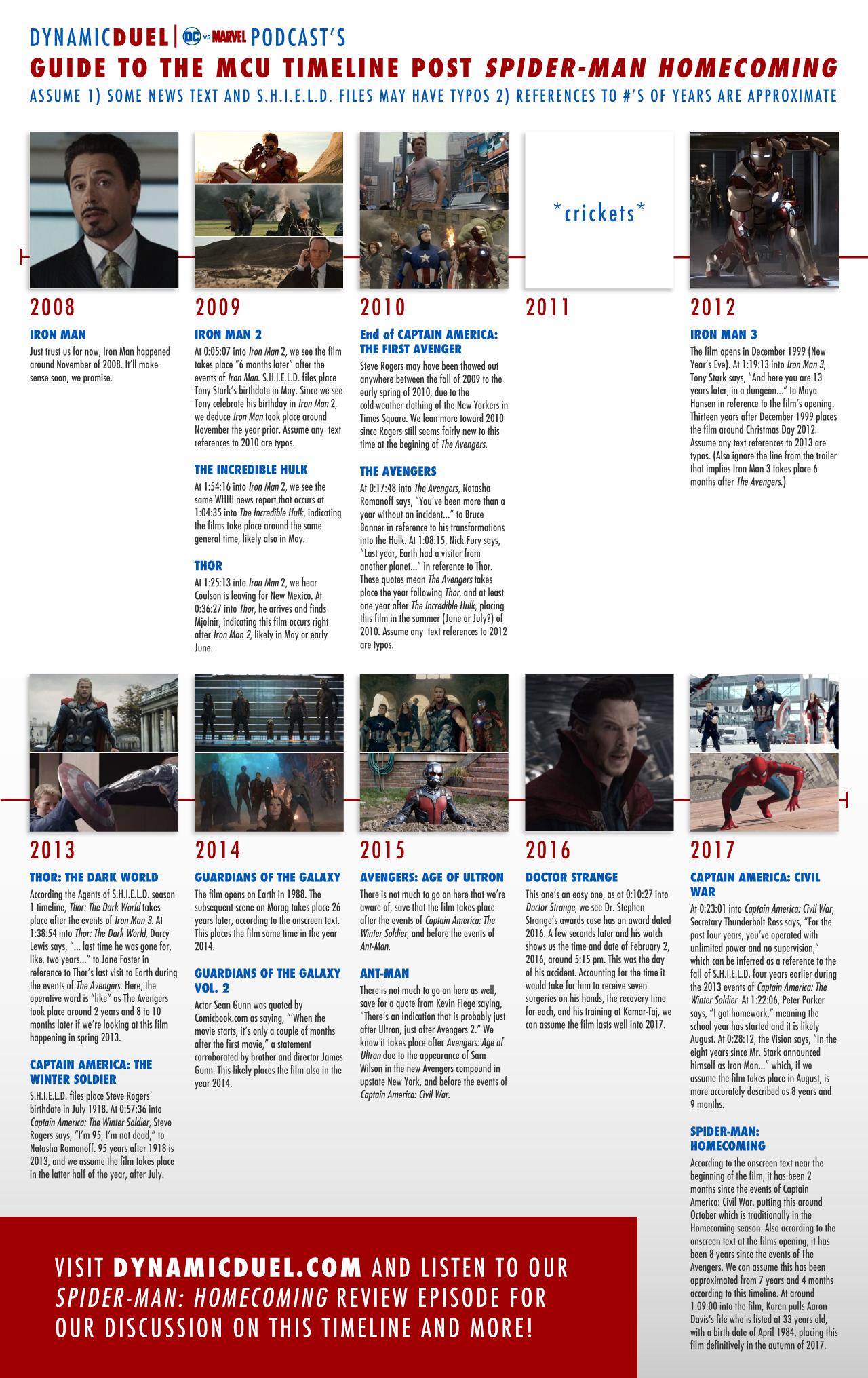 You just have to assume that the Civil War and Homecoming references to 8 years are approximate. They mean anywhere between 9 years and 7 years.

Based on recent interviews with Kevin Feige (president of Marvel Studios) and Joe Russo (one of the Infinity Wars directors), it seems safe to assume that the 8 year date was incorrect.

Russo, in an interview with Ashish Chanchlani, described the time gap between Avengers and Homecoming as:

“It was eight years, I believe,” Russo responded. “It was a very incorrect eight years.”

Feige, in an interview with Cinemablend, explains that Marvel is building their timeline based around the central event that changed their world:

We're doing that, and the origin point for us is Tony saying, 'I am Iron Man.' So everything will be years after that, years before that

With those two things put together, the most likely explanation is that Spider-Man: Homecoming takes place 8 years "AIM" - After the "I am Iron Man" moment - which would place the movie in roughly late 2016 or early 2017, where it makes sense.

Maybe, we just don't know. I've gone into painful detail in this answer but, to summarize the problem, there are two options:

What The Movie Says

The movie itself gives a few clues to when it takes place, all pointing to September of 2017. These clues include:

All of these would seem to put Homecoming in 2017. If, as we originally thought, Avengers took place in 2012, that would clearly make no sense.

The One Year Option

If we allow "8 years" to mean anywhere from 7-9 years, with some conveniently chosen rounding, then we can pin down Iron Man 2 to May 2009 and move everything else around it. That puts Homecoming in 2017, where the movie claims to be in the first place.

Why This Is Terrible

For starters, until now, most of the MCU movies have all been set in the year they were released, and everything in the movies appears to support that. (The exceptions are Thor and The Incredible Hulk, which take place at the same time as Iron Man 2, and Guardians of the Galaxy 2, which happens in 2014.) In fact, the producers of Homecoming gave an interview where they implied they set Homecoming earlier than it's release date, to tie into Civil War:

One reason we've always assumed this is because it make sense give how much happened between movies. The characters seem to evolve, and the world seems to recover, at about the pace you'd expect from the gap between release dates.

Also, if you go outside the movies themselves, and include the supplemental / promotional materials, we can restrict our timeline even more. In particular, we can pin down Iron Man 2 as happening in 2010, meaning the Avengers couldn't take place any earlier than 2011. That makes 2017 a huge stretch to be called "8 years later".

So, for most people, the more sane conclusion is that Sony/Marvel just goofed. They somehow got the timeline wrong when they decided it had been 8 years since Avengers, when it really should have been 4.

As of November 2018, The Avengers and Spider-Man: Homecoming are set 4 years apart.

In an April 2018 interview with Ashish Chanchlani, Infinity War director Joe Russo admitted that the 8 year time gap was a mistake.

Ashish: This ones for you Joe. What was the time gap between the events of Avengers and Spider-Man: Homecoming?

Joe: Oh, it was eight years, I believe.

Ashish: And it was quite controversial.

Joe: Yes, it was a very incorrect eight years.

According to the MCU timeline in Marvel Studios: The First 10 Years, The Avengers takes place in 2012, while Spider-Man: Homecoming takes place four years later in 2016. 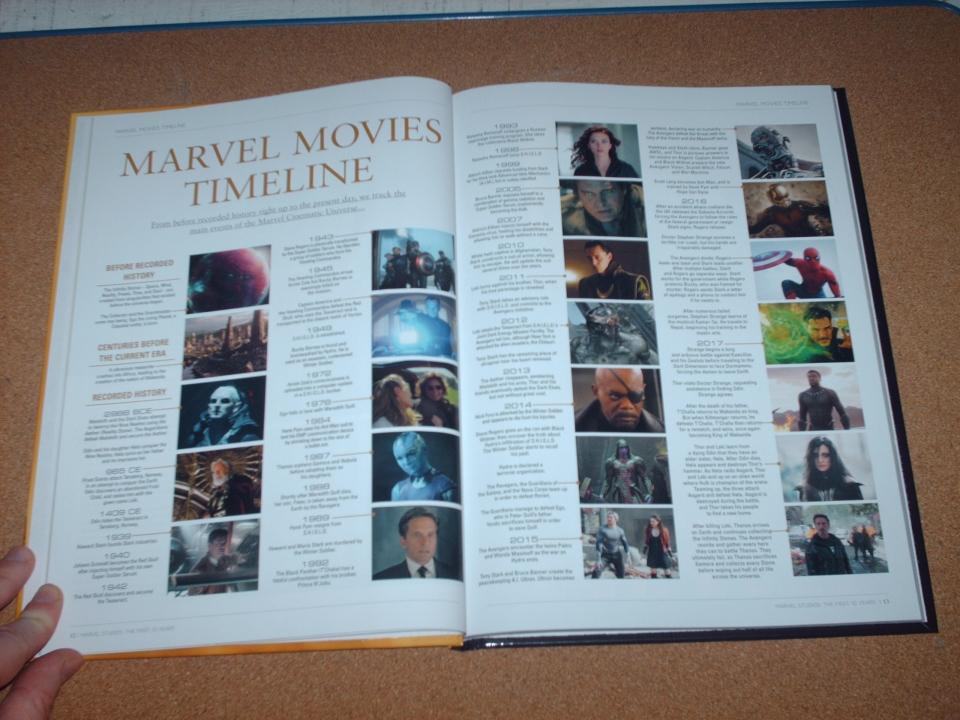 Q: So when does this movie take place? Generally in the MCU, movies take place when they are released. But this feels like it’s…

Eric Carroll: It will be a little off. There will be some awkward chronology in that the movie comes out almost two years after Civil War, but we’re playing it like it’s a few months after Civil War. It hasn’t been years since Tony called him back. It came down to one of things we wanted to do was keep him in high school as long as possible. Let’s have him do something fun and different. Sony came to ourselves when we sat down and we thought, ‘Why do this version?’ And it is because we can really do a high school. Show that this is a young hero. Otherwise you have seen it all before…

This is a fun, different take. If we say that it was actually two years after Civil War then he’s moving on, he’s a senior, and when the next movie comes out, it’s his sophomore year of college, and we really wanted to do multiple movies where he’s in high school. So it should have been taken place in 2016 only and homecoming usually occur near to September or early October, so it should take place in sep/oct 2016 but title card say it take pace 8 year after Avengers which occur in 2012 making it 2020 which break the timeline.

If we assume the title card is wrong then it all makes more sense except Toomes's quote.

In place of ads touting real N.Y.C. tourist spots, there are posters hawking the 2018 Stark World Expo, as well as the Battle of New York Memorial Museum, which carries the tagline, “…Remember Always.” - yahoo.com

Why would they show Expo advertisements from the past? So it's better to assume that after an 8-year title card is a screw-up.

Infinity War co-director Joe Russo is currently doing the rounds, and in an interview with Ashish Chanchlani he finally commented on the problem. Chanchlani decided to put Russo to the test with trivia questions about the MCU, and one of them was the time-gap between The Avengers and Homecoming. “It was eight years, I believe,” Russo responded. “It was a very incorrect eight years.”

“All of that debate has encouraged us. We are going to be publishing an official, and I’m not sure when, or in what format, an official timeline. It’ll probably be apart of ah, I don’t know, apart of an in print that you can fold out and look at.”

“But suffice to say, only in limited cases do we ever actually say what the actual years are because we never want to be tied down to a particular year and I think people assume that whenever the movie is released is when is when the movie is taking place, and that is not the case.”

The specifics of the timeline, looking at… I’ve loved timelines, I love the Star Wars timeline, with the Battle of Yavin, everything is either After The Battle Of Yavin, Before The Battle of Yavin. We’re doing that, and the origin point for us is Tony saying, ‘I am Iron Man.’ So everything will be years after that, years before that — to the Big Bang, which is where it starts! It will look very cool and complex like Doc Brown on a chalkboard by the time it’s published. - source

Not the answer you're looking for? Browse other questions tagged marvel-cinematic-universe chronology spider-man-homecoming .