Why did those monsters appear in Seoul?

It's a pretty weird monster movie. I'm talking about Colossal (2016) Spoilers ahead:

So I guess those monsters were created from Gloria's anger. When Oscar destroyed her school project, Gloria was so angry. Later when she came back to her hometown and passed through the exact same location of that incident, monsters started to appear. But why in Seoul? Why not in her hometown or in her country? What's the connection between Gloria's hometown and Seoul?

So the monsters are just a representation of what the consequences of Gloria's actions are. They aren't real.

It's interesting to know about the copyright infringement from the other answer. But you're wondering why some random Asian country. Let me try and answer that part of it.

What’s up with Korea, why Seoul?
Well, Seoul is the opposite side of the Earth to America. There is a 12 - 13 hrs difference in time zone between the two places. Metaphorically it’s a place which is behind Gloria, what she can't see. Something that is not in her area of vision. When Gloria ends up doing something, it affects a lot of people. She doesn’t see that it affects others. The monster appearing in Seoul and hurting people is indicative of how her actions have consequences on others that she is not bothered about.

So a random Asian city because her actions are hurting people she doesn't know and is unable to see this. But when she starts seeing what the monster does on the news, she begins to slowly realize how her irresponsible ways can cause do much damage to not just people she loves but then others too. Others she may not even know.

While I like both of the existing answers (and it seems the OP is pleased), one of them appears to be an analysis-type answer and the other appears to be a behind the scenes answer. The question, however, is about plot explanation and asks about the connection between Gloria (the character) and Seoul - so I thought I'll just add an answer to the question as asked.

The in-universe explanation to the monsters' appearance in Seoul is simple: The model city Gloria made for her school project? That was Seoul. 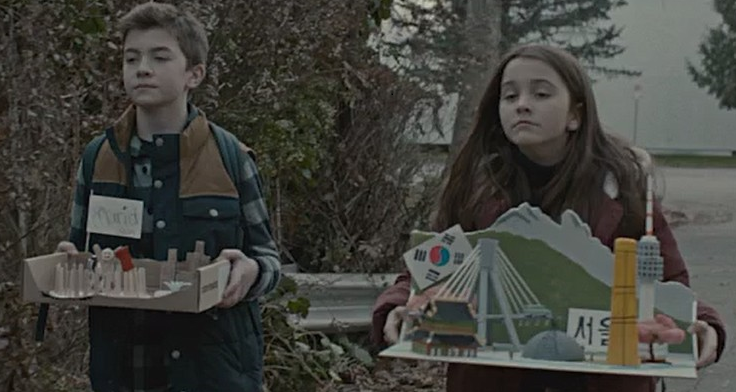 So the scenario is this: Kid Gloria worked hard on her project and created a very detailed model of Seoul complete with many of its famous buildings and its cherry-blossom landscape. Oscar's project, on the other hand, is quite shoddy. It's a model of Madrid but he spelled the name wrong ('Marid') and it's basically just a cardboard box with a plastic toy cow in a bullring made out of popsicle sticks (and what looks like a very crude rendition of Plaza de Cibeles in the corner).

So when given the chance, a jealous Oscar stomps on this model of Seoul (just like his future self would do to the actual city), enraging Gloria. And one cosmic storm later, their emotions somehow manifested themselves at that very moment through their dolls... that now appeared in the real Seoul.

The original intention was for the monster to be rampaging through Tokyo, Japan as a direct comparison to Godzilla...but the production company got sued.

However, there is one film Colossal’s producers are keen to avoid comparisons with – Godzilla. Last year, Toho, the production company which owns the rights to Godzilla, sued Colossal's Voltage Pictures for trademark infringement after they used pictures of the Japanese behemoth monster to promote their film. According to The Wrap, an email to investors at Cannes summed up Colossal with the phrase "Tokyo is under attack by Godzilla and a giant robot.”

Vigalondo had previously been quoted as saying he would make "the cheapest Godzilla movie ever", but after an out-of-court settlement all references to the radioactive lizard were dropped, and the film’s location was moved to Seoul, far from Godzilla’s traditional stomping-grounds.

Japan-based Toho sued Voltage for copyright infringement in mid-May as the company was shopping Colossal around the Cannes Film Festival. It wasn’t hard to see why as Voltage’s pitch included photos of Godzilla movies and Vigalondo was quoted in an interview that he was going to make “the cheapest Godzilla movie ever.” Hathaway stars as a woman who moves back to her hometown after losing her job and boyfriend — only to discover that she is somehow strangely connected to a giant lizard-like monster that materialized over Tokyo and is wreaking havoc on that city. Dan Stevens, Austin Stowell and Tim Blake Nelson also star.

Not the answer you're looking for? Browse other questions tagged plot-explanation colossal .

11
Why did those trucks/tractors act in a strange way?
12
Why did Melisandre appear like this in S06E01?
7
Why didn't Vito kill those two guys?
2
Why did so many cats appear in this scene?
1
Why did the 24th chromosome pair turn people into monsters instead of superhumans?
4
Why does the demon murder those victims?
8
Why did John Doe appear as press photographer?
11
What is the relation between The Cloverfield Paradox (2018) and Cloverfield (2007) and 10 Cloverfield Lane (2016)?
2
Why did those German Dancers chase after the Griswolds?
11
Why did Gamora appear to Thanos as her younger self?