Why did John Doe appear as press photographer?

John tried to face the detectives and tried to take photos of them in Se7en movie. 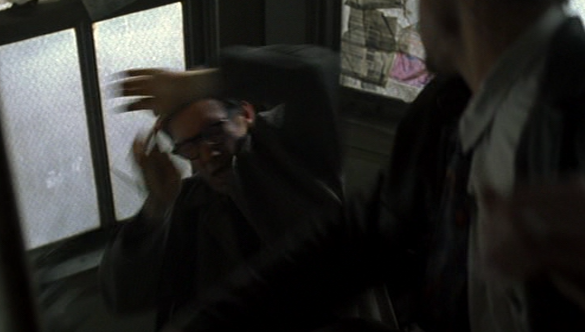 What is the reason?

However, it's not unknown, at least in movies, for serial killers to get close to, or insert themselves into the investigation.

Here John Doe disguises himself as a press photographer, perhaps to see how the police are carrying out the investigation....or perhaps because he needed a disguise to exit the building where the Sloth victim was being held.

Also, using the flash makes it harder for the detectives to get a good look at his face.

In fact, the script offers more clues in that it was intended to show that John Doe was following the investigation. Only the final part seems to have made it into the movie...

Not the answer you're looking for? Browse other questions tagged plot-explanation character se7en .

3
Why did detective Mills transfer in Se7en? Did John Doe have anything to do with Mills' transfer?

38
Did John Doe manage to complete his 'masterpiece' in Se7en?
2
How did John's dead wife appear and phone John in "The Mothman Prophecies"?
14
Was Tracy Mills a part of John Doe's plan from the beginning?
11
Why did John Doe need to check out books at a public library?
3
How did John Doe get past the dogs?
3
Why detective Mills keeps telling a woman to "eat"?
20
Does the FBI keep track of people's library records?