Why is the path of film through a camera so convoluted?

Here is a shot of the inside of a Panavision 65mm camera. 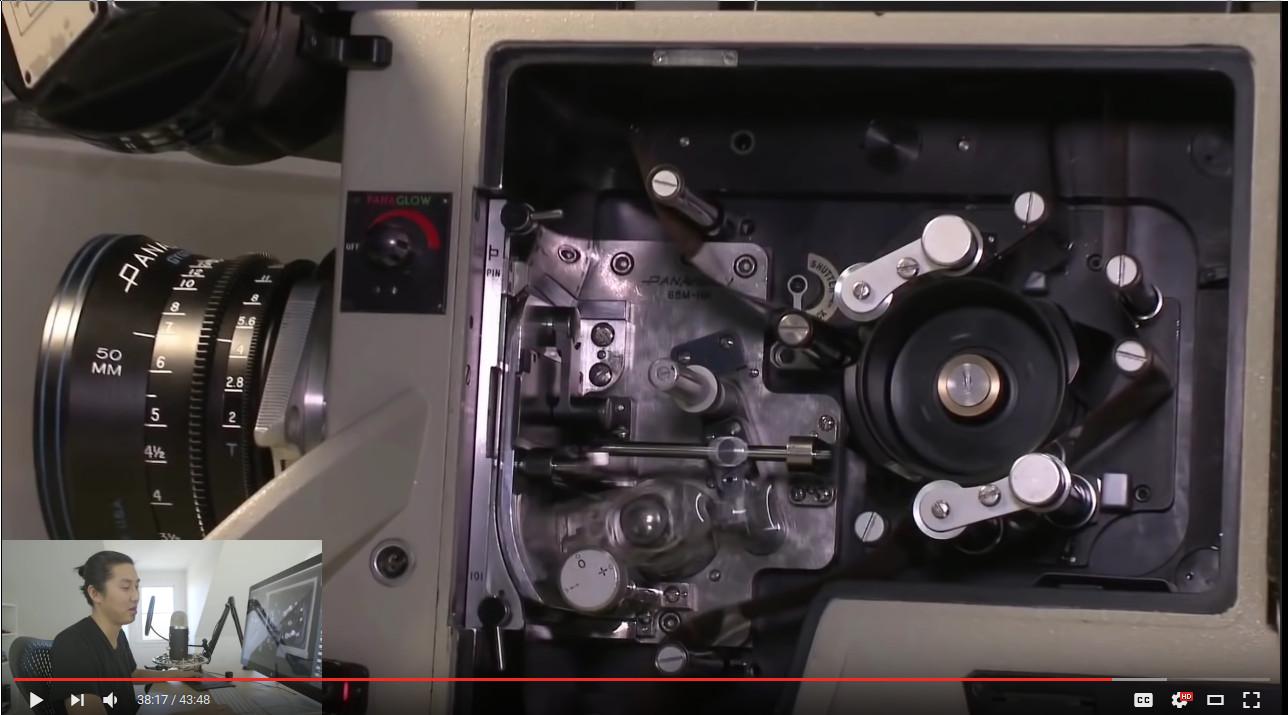 As you can see the film makes a number of turns. Why is this done? It seems like it would only make noise and scratch the strip.

One of the reasons is to create a "loop", but this "loop" is probably a different definition of the word than you're thinking.

Film comes off the reel smoothly. Film being exposed to light from the lens has to stay stationary while it's being exposed. To accomplish that, the film strip kind of bulges upwards above the lens, then gets yanked suddenly into place in front of the lens while the aperture opens for an instant. That "yanking" into position gets rid of the bulge ("loop") of film. While the aperture is open, that bulge ("loop") grows again. The aperture closes, and the film is suddenly yanked forward into position again, getting rid of the "loop" that had just formed.

Of course the film "below" the lens will have a loop in it too, after the still section of the film strip is pulled past its position directly behind the lens.

So that's the complicated part, in the middle of the film strip's path. The rest of the turns most likely have to do with getting film from the reel, positioned farther behind the lens, up to a place where the loop can be formed, and without the film becoming detached from the rotating sprockets that are moving it smoothly forward. The same explanation applies to the film after it's been exposed behind the lens: the curves in its path are there to keep it hooked onto the sprockets so that it can be smoothly led back to the receiving reel.

The intermittent mechanism or intermittent movement is the device by which film is regularly advanced and then held in place for a brief duration of time in a movie camera or movie projector. This is in contrast to a continuous mechanism, whereby the film is constantly in motion and the image is held steady by optical or electronic methods. The reason the intermittent mechanism "works" for the viewer is because of a phenomenon called persistence of vision.

11
Camera shot with close-up next to farther away standing person
14
How are the face-in-suit segments of Iron Man filmed?
6
Lady in the Lake 1947 (Mirror Scene)
9
What is the term for this kind of final scene?
6
In World War Z what is the name of this camera technique that switches between the protagonist and what they see?