What is the pink thing on the Sherman tank?

When the Fury tank enters the town, a pink object is visible on the tank. What is that?

TL;DR: it's a mail bag and it's there to identify it as 'friendly' to planes.

I thought for sure it was a captured Nazi flag, but finding the same thing on other tanks suggests otherwise. What follows is highly speculative about what it is and why it's there but IMO, it draws reasonable correlations; history buffs might know better. 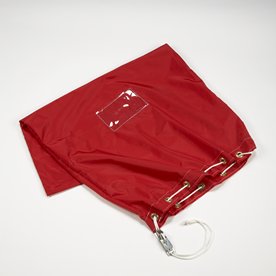 If you click the picture you can see what looks like two strings that act as handles or closers. Those may just be the straps holding it down, but both of our pictures have what seems like the rounded bottom that would be sown into 'waterproof' bags of that era.

I had difficulty finding a US mailbag in red, perhaps this is a British thing?

There's plenty of other shots that show most of the other tanks having one. They're usually strapped on a little more haphazardly, though. I guess they got tired of digging it out every time they passed a grunt; there it is, bro. as I doubt the field manual says, "strap red bag on back of tank"...

Although now I speculate as to whether it was a battlefield decision to hang a don't-run-into-me flag on the back, or perhaps it means don't-bomb-me-yo.

At the range, a red flag means a miss:

He had Maggie's drawers..you know what that means...means he couldn't shoot. –JFK

Though I can find no military suggestion of this being protocol, it seems reasonable because as the war went on, it became as likely to be bombed mistakenly than otherwise (especially considering it's almost always strapped to the top of the cargo).

Improved technology to assist in identifying friendly forces is also an ongoing response to Friendly Fire problems. From the earliest days of warfare, identification systems were visual... –Wiki

It's a standard identification panel carried by Allied tanks to ID them to Allied aircraft.

“For Want Of A Gun: The Sherman Tank Scandal of WWII”

It is a GI Issue Air Recognition Panel to keep allied planes from bombing and strafing their own tanks. Still in use today except now it is orange and also has a thermal reflective side for night operations. Excellent attention to detail in FURY by the prop-masters.

It is not a mail bag. During WW2 the US had marker panels in various colors. They were originally fluorescent how ever they faded badly and quickly. The first ones were issued to airborne troops. The instructions stated not to expose them to sunlight for extended periods, thus the fluorescent red became pink. They were issued in red, yellow and green. All fluorescent and all had white on they opposite side. They were trimmed in webbing of O.D.#5 or 7. They also had grommets along the sides to secure them in place. Reference book: Government Issue collectors guide US Army ETO page 147 ISBN# 2-913903-87-8

it is most likely something added by directors as a sort of gag or joke sometimes they do that if any of those scenes were filmed in October it could have to do with breast cancer maybe? most of the movie is dark and has little color so it could be to add some different color then gray and black. but I'm positive it wasn't to make the movie more accurate.

Not the answer you're looking for? Browse other questions tagged props fury .

35
What does the pink teddy bear represent in Breaking Bad?
17
Why did Fury (2014) end this way?
8
What do the scars on Brad Pitt's back mean in Fury?
2
What was Brad Pitt's character's motivation to not take cover in Fury?
4
What is the round object given to Philippe by Papa Rudy?
6
What is the significance of Pink Bunny in Silent Hill: Revelation?
6
Why didn't Germans simply set Fury on fire?
6
What's the matter with Captain Boomerang's pink unicorn?
15
What is this round thing on the pantry door in The Shining