Why is not a single grounder deformed in The 100?

Due to the radiation, at least some of them should have been deformed. The people in the desert produced deformed offspring, and the deformed were outcast, or killed.

But all grounders are very strongly built. Why is that so?

The Woods Clan are so selective that

If a child is born with a mutation, they are cast out and abandoned to erase the stain from the bloodline
-The 100 Wikia: "The Woods Clan"

This is the reason they have no single deformed member.

As for "All grounders are very strongly built", that's because:

Most children begin to learn from a young age how to be warriors, and are taught English, weapon skills, and their people's customs.
-The 100 Wikia: "The Woods Clan"

Note that the woods clan are also called trikru in their own language, which is Trigedasleng.

This is all speculation, but I believe that the grounders had an immediate tolerance to the radiation after all the bombs detonated. I think that was the writers way of creating new different cultures on the ground. For example:

I think it's just there way of utilizing Darwinism to create the different cultures in the show.

They're called Nomadic Grounders, Wastelanders or Frikdreina (derogatory term). Normally, they get cast out and left to die.

Nomadic Grounders, also known as Wastelanders or Frikdreina, are Grounders who have no clan because they or a family member may have been seen as a "stain on the bloodline" due to birth defects and cast out. So far, they seem to inhabit the Dead Zone with some of them on their way to the City of Light in search of safe haven.

The most memorable one of them is Emori who first appeared in the 2nd season and still part of the main/recurring cast.

You can see some of the others in the link above. 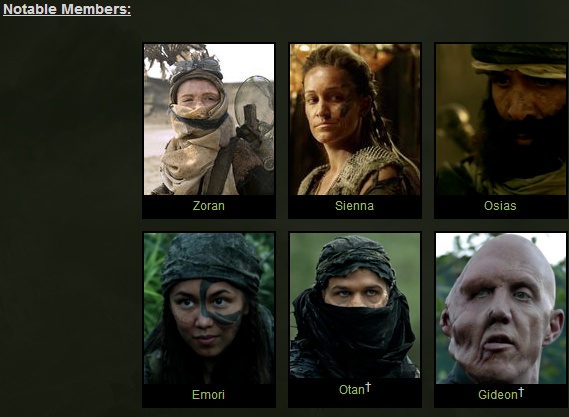 And to clarify, They're grounders, or at least were born as grounders but got cast out and now (usually) live in the desert.

Not the answer you're looking for? Browse other questions tagged plot-explanation the-100 .

11
Why did Mikael Blomkvist not have any moral concerns about hiding the identities of two serial killers?
14
Why did Ben manipulate Locke into not entering the code?
8
When was the guests' evacuation in Jurassic World?
4
Population always increases in The 100 in respect to the Grounders
2
Why do chipped people obey A.L.I.E?
2
Who are all these people killed at the end of Casino?
1
Why did a group of swimmers stay in one place in The Meg?
8
Why did Walter White insist that Jack's hitmen kill all of Mike's men in just 2 minutes?
4
Why has nobody looted or settled Las Vegas?