What causes the tension in the strap between Dr. Ryan and Matt?

In the scene where Dr. Ryan Stone's (Sandra Bullock) leg is entangled in Soyuz's parachute cords and she is tethered with Matt Kowalski (George Clooney) through a strap, there is tension in the strap, suggesting act of some external force. Where is this force coming form that is causing tension in the strap and pushing both Dr. Ryan and Matt outwards?

I'm guessing that the tension might be coming from centrifugal force, but immediate events before this scene, as well as other parts of ISS in same scene do not suggest presence of such force (or presence of any kind of rotation).

While I for myself am not sure if there was any tension (especially a continuous tension pulling him away even after his motion has been stopped by Dr. Stone), this interview with a real astronaut suggests there wasn't, especially this section:

We see quite a few worst-case scenarios in the film. George Clooney ends up untethering himself from his crewmate and literally floating away into space. Is dealing with that scenario part of your training? Or does that not even come up?

So when George he let go of her hand, if it was in real space, he wouldn't have been pulled away.

He would have just floated there.

So according to the above interview the answer to your question would be "nothing".

I'm kidding of course. I was caught out by this attitude when I posted my own question about the Physics of the movie.

As much as you'll want a decent answer to this, it's likely that the only one you'll get is the same as mine; the film is hugely flawed, scientifically speaking.

I'll refer you to the link Christian Rau was kind enough to provide me with, from a real life astronaut fact checking the movie. He addresses this question in his interview.

During that scene, Stone's leg gets wrapped up in some parachute cabling. She then starts slowly rotating around whatever the cabling is stuck on. Then she grabs the strap attached to Kowalski. She's still rotating. In order to hold onto him, she's providing a centripetal force. After releasing him, she finally rotates into another part of the station, and works her way to the airlock.

I look forward to being able to provide some evidence of this once the film is released on blu-ray. 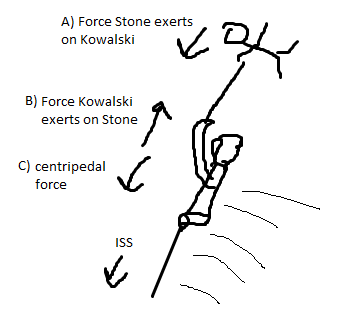 We have 4 things of import in this image.

C is larger here due to it needing to pull the mass of both Kowalski and Stone. Once Kowalski is released, then C just needs to pull Stone, which drastically reduces C's magnitude.

In the scene, while C is large, Stone's leg is slipping out of the parachute cabling. Once C is reduced, this stops, and she soon swings into the hull of the ISS.

The film was not really successful in getting this idea across, but I'm sure we can agree it is a difficult scenario to depict. I personally am able to suspend my disbelief that far.

It doesn't help that the director is trying to tell the story using long, uninterrupted takes. He doesn't have the option of the usual tension-building technique of cutting to a closeup of the parachute slipping free of one outcropping, then another, etc.

I'm not a physicist but basically it comes down to Newton's three laws of motion. Basically, an object in motion will stay in motion unless another force stops it. In space, the only thing that could really stop his momentum would be an object of greater mass, but the two astronauts are approximately the same mass so in effect, he was transferring his momentum to her and causing them both to be in trouble, so he let go.

Makes no sense regarding what is depicted in the scene

What would have made sense for this setup is if they had a centrifugal force on them (e.g. by making the whole station rotate slowly, maybe caused by a previous hit)

But in the scene it was pretty clear that the station had no visible angular velocity and the slow cascading untanglement of the parachute-cord could not create that continous force, it would need to be a continous slipping untanglement.

This is covered in the film's original script. In short, she hadn't killed his momentum, as evidenced by the fact that he continued to float away after she let go:

The tether attached to Matt’s suit passes two feet away from her and Ryan grabs the tether. It slides through her closed fist, until

Her grip tightens and the tether STOPS.

Matt’s momentum is now pulling Ryan, dragging her loose from the parachute.

MATT: You have to let me go.

MATT: You have to.

MATT: Those ropes are too loose, I’m pulling you with me. You have to let me go or we both die--

3
Why did he have to let go?
2
Why was George Clooney pulling Sandra Bullock away?

12
What is the past history between Gandalf and Bilbo?
9
What is the history between Doug and Rachel?
19
What is the relationship between Daenerys, Viserys, and dragons?
2
On two occasions, the main character opens a capsule hatch and the hatch blows open violently
6
What causes Chloe to bleed?
5
What was the argument between pirates and Yondu?
1
What was the Ebola plot in Tom Clancy's Jack Ryan?
5
What causes the origin of Batman?