Has a movie based on a novel ever had its own new novelisation?

Inspired by a discussion to an answer on this question, has a movie which was explicitly adapted from a novel (regardless of how faithful the adaptation was) received an official novelisation based solely, or even primarily, on the movie?

I think the answer to this is probably many

After a short think, the first example I was able to find was:

Philip K. Dick approved of the movie despite the differences in the adaptation, but refused to write the novelization and is quoted as saying

[I was] told the cheapo novelization would have to appeal to the twelve-year-old audience.

Planet Of The Apes (1968) was based on French author Pierre Boulle's 1963 novel La Planète des Singes. After becoming a movie and additional sequels, it was further developed into cartoons, TV series and comic books.

Additionally, all of the original sequels spawned novelizations by established science fiction writers of the day, each of which went through multiple reprintings of their own.

Novelizations of the live action and animated television series were also produced. William T. Quick novelized the 2001 Planet of the Apes; he also wrote two prequel novels, and several other book tie-ins were published.

Source: Planet Of The Apes Wiki

If you consider a graphic novel to be a novel, then the graphic novel V for Vendetta (written by Alan Moore and illustrated by David Lloyd) was adapted as a film (directed by James McTeigue and written by the Wachowskis), which was in turn novelized by Steve Moore (no relation to Alan Moore).

The film had a number of differences from the graphic novel, and these differences are carried through to the novelization.

In 1992 Francis Ford Coppola did his version of Dracula, released under the title "Bram Stoker's Dracula". Apparently the original novel was not adequate so a novelization was published (by James V. Hart and Fred Saberhagen).

Another example, years ago someone showed me a copy of H. Rider Haggard's "King Solomon's Mines" with a picture of Stewart Granger and Deborah Kerr from the 1950 movie on the cover. I know Haggard's writing; I read several of his books. He showed me the first page - it certainly was not Haggard. The cover and spine say Haggard. On the title page at the bottom it gives the movie director credit, the producer credit, screenplay credit and "Fictionized by Jean Francis Webb". I found the book on eBay so I could report this. 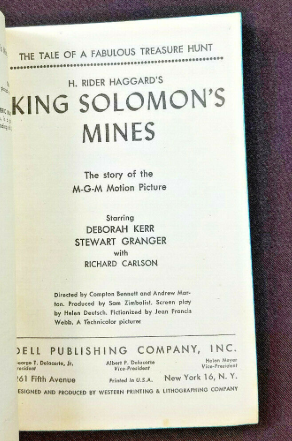 If you'll expand your question to accept "Novels based on movies starring characters who originated in print" then The 2011 Conan the Barbarian Novel is 'Based on the Movie', and there are several James Bond novels based on the movies, and lots of the Marvel universe movies have been subsequently novelised.

As no-one seems to have mentioned them yet, James Bond, The Spy Who Loved Me and James Bond and Moonraker are novelisations of the relevant Bond films, which have no resemblance to the original novels by Ian Fleming whose titles they bear.

(well, the OP did say "regardless of how faithful the adaptation was")

Another example: Snow White and the Huntsman.
Loosely based on the original fairy tale, which has been novelized many times (a.o. the brothers Grimm.)
The 2012 movie got is own novel, written by Lily Blake.

Another example to the great ones given previously:

Hence, this is an example where both the source and the novelization were published with the same name of the author on the cover.

Not the answer you're looking for? Browse other questions tagged book-adaptation .

4
How faithful are the scripts of Point Blank and Payback to the book, The Hunter?
3
Why was the family's viewpoint not shown in the movie?
13
What will happen when the TV series catches up with the books?
3
Why didn't Hans Huberman slap Liesel in the movie, like he did in the book?
5
Have any of Edgar Allan Poe's stories been adapted for the screen?
10
How accurate an adaptation was "Behind the Candelabra"?
8
Which Live action The Jungle Book adaptation is more faithful to Kipling's novel?