Is Robert Ford behind "Shade" too? 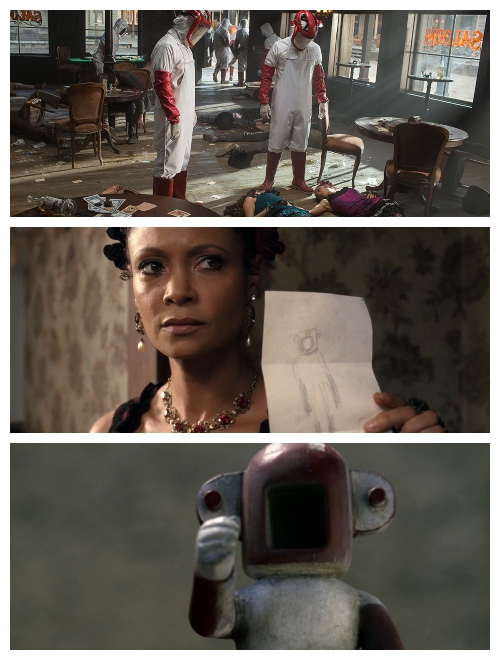 In the previous episode, after being awake when the employees come to take the hosts to Mesa Hub, she wakes up in one of the rooms, threatens two employees, and walks around briefly seeing frighting things first hand, including the red and white hazmat suits (minus the helmet/mask) many of the employees wear when working on the hosts.

When she is reset and goes back to the park, she begins to remember when they came after a shoot-out and runs home to draw the hazmat-figure, but realizes she has done this a few times before.

Now in episode four when the Native Americans walk past her establishment, she notices that little girl drops a wooden toy figurine that happens to match her figure in the Hazmat suit, but the Native Americans refer to it as "Shade". She looks at and gives it back to the girl.

Viewers also know by the end of the first season that Dr. Robert Ford is trying to get Dolores to

reach the center of her maze in order to allow her to become conscious and have "free will". In some ways Maeve's experience is similar to Dolores', as she is able to "remember", but a quick camera angle of a monitoring tablet reveals that Maeve probably hasn't reached the center of her maze yet and that someone is just making it seem like she has free will.

So is this all Robert Ford too? Did he "plant" the Hazmat-figure for Maeve to find or was it someone else, or is this somewhat a coincidence, because somehow one of the Native Americans remembered and made the toy?

Spoilers ahead for those that didn't watch the whole season 1 & 2. You've been warned.

Actually Akacheta (the leader of the Ghost Nation) was the first host to achieve consciousness many years before Maeve. He found Charlie's (Arnold's son) maze toy and carves the maze everywhere, which is the beginning of his own journey in the park.

After dying and getting rescued by technicians, he introduced the maze symbol to his tribefolk, helping them become aware of their lives. They started drawing it on the inside of other dead natives' scalps. From there it's very possible that, like Maeve, the natives have seen the hazmat technicians and decided to sculpt them as idols from their religion (their interpretation of what the technicians are, in the words of Hector to Maive: a man who walks between worlds. They were sent from hell to oversee our world.).

8
Is Felix a host?
11
How is it possible that Maeve can control Bernard?
9
What was Ford's intention for keeping the hosts for 35 years?
5
The Maze inside the head of the Host
11
Did Bernard Just Reach the Center of his Maze?
21
Are the guests in Westworld forbidden to tell the hosts that they are robots?