Did Bernard Just Reach the Center of his Maze?

In the Westworld season 2 finale, viewers experience a lot of surprises. One such surprise is that Robert Ford seemingly left Bernard's consciousness, when he deleted his code and comes to realize that the Ford he has been talking to, the whole time since then, is actually himself! 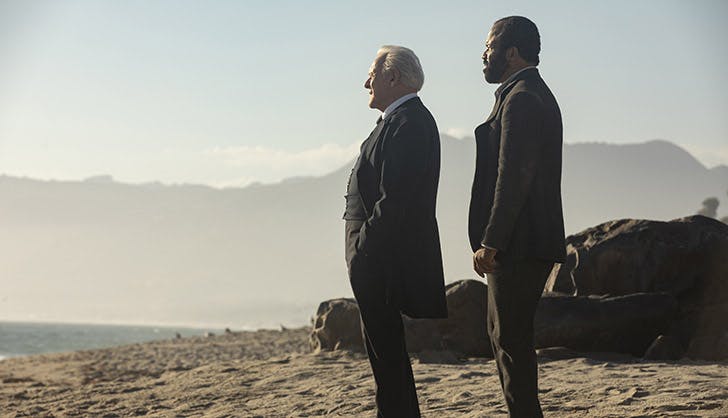 This is similar to when Dolores eventually reaches the center of her maze at the end of season one, when she realizes that Arnold's voice, is at some point, not his, but her own.

Does this confirm that either Journey Into Night/The Door was partially about Bernard becoming conscious by reaching the center of his maze? Did Bernard reach the center?

Lisa Joy explained to The Wrap

Wrap: Now, since we saw Bernard realize he had been imagining Ford at the end there and was really doing all of those things by himself, does that mean Ford is gone for good this time?

Joy: Yes, Ford is gone. And yeah, I think it’s really — it’s interesting, because remember how in the first season with Dolores, in trying to come to consciousness she would hear Arnold’s voice while doing these things? And part of her embracing her agency and consciousness is realizing, “There is that voice. That’s not necessarily yours, that’s my voice. That’s my inner voice. And I have to achieve my own inner voice and inner instincts.” And embracing that voice is what brought her to full personhood.

And meanwhile, Jeffrey Wright’s character, Bernard, has been kind of struggling on his own. He didn’t even know he was a Host, because he was kind of very fragile when he was masquerading amongst the humans, so by the end of the season, you’re absolutely right, he manages to get rid of Ford — who did plant himself there as an emergency stopgap measure within the park to be upload into Bernard’s brain.

But once Bernard, who is an excellent coder, has ridden himself of Ford, he’s gone. And what we’re left with now is really a story about one Host, a new Host, kind of blooming into consciousness, who embraces his own inner voice, which he realizes has been guiding him in all the last major moves he’s made to ensure the future of his kind.

12
How is it possible that Maeve can control Bernard?
8
Why did Ford tell Bernard to do that in S01E09?
0
How did Ford predict humans behavior in his narratives?
9
What was Ford's intention for keeping the hosts for 35 years?
5
The Maze inside the head of the Host
4
Why would it be dangerous for a host to reach The Forge and get all the guest data?
5
Why did Dolores do this to Bernard at the series ending?
8
Is Robert Ford behind "Shade" too?