Where and what is Storm's End?

In Game of Thrones S08E04 Gendry was named the Lord of Storm's End.

Where is this place? In Westeros? In the northen part or the southern part?

Does this place have any history behind it? I don't think I have seen this place on the opening credits or in the show.

Storm's End is the ancestral home of the Baratheon's. At the beginning of Game of Thrones, it was held by Renly Baratheon.

Storm's End is in the southern half of Westeros, as shown on the below image: 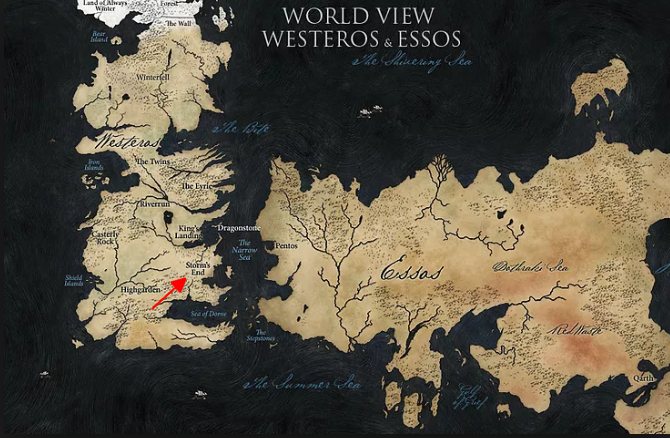 As a note, we have seen Storm's End before. This is the castle that Davos smuggled Melisandre into to birth the smoke baby back in season 2.

We still haven't seen Storm's end in Game of Thrones:

Unlike Dragonstone, which once belonged to the Targaryens before Robert Baratheon seated his brother Stannis on its stone throne, Storm’s End has so far gone unseen in Game of Thrones. Located in Shipbreaker Bay, to the south of King’s Landing and Blackwater Bay, Storm’s End has been the seat of Baratheon power ever since it was captured by Orys Baratheon, a commander in Aegon Targaryen’s army, which invaded Westeros hundreds of years before the events of Game of Thrones. It is an intimidating fortress, which held strong against a siege by House Tyrell during Robert’s Rebellion, which overthrew the Targaryens and put the Baratheons on the Iron Throne.

The last lord of Storm’s End was Renly Baratheon, who died all the way back in Game of Thrones Season 2, in the early days of the War of the Five Kings. Since then Storm’s End has been unoccupied by a Baratheon lord, its ownership uncertain after Stannis, the last of the Baratheons was killed attacking Winterfell.

2
What are the seven Kingdoms?

9
How did Melisandre know about Gendry's whereabouts?
3
Is there any evidence to clarify Jon Snow's fate?
6
What is the significance of the direwolf deaths? Is there a hidden meaning?
15
What does this creature breathe in "The Dragon and the Wolf"
4
Who was the Lord of Storm's End after Stannis Baratheon?
22
Was this a power play by Daenerys?
4
Why is Westeros a bigger deal than Essos?
5
Where were the dragon skulls?
30
What is to the west of Westeros?