Why would Walter leave that book in the bathroom?

He was so careful about everything, why would he leave the book in the bathroom? Was it anything more than the writers just not knowing how to make Hank figure it out, so they came up with that nonsensical plot device?

Or was there some legitimate reason he left it there (other than the dumb "he wanted to get caught")?

I disagree that it was out of character. Walt is arrogant, and while cautious he's also an amateur criminal as pointed out many times through out the series. This is why Saul was able to easily find him in Season 2 Episode 8 where he confronts him in his classroom and tells him if I can find you, how far behind can the cops be? And also a big part of why Mike hates him so much. He's arrogant and reckless.

Walt even confesses outright to Hank in Season 3 Episode 1 that he has half a million in cash.

Hank: Jeez, what do you got in there, cinder blocks?

Walt: Half a million in cash.

There are plenty of other moments throughout the series which build Walt's character as someone who is yes smart and cautious, but also very arrogant and reckless and its not much of a leap to assume that he might keep the book in his bathroom where others might see it.

The problem is not the book itself, it's the dedication from Gale on page 3 that shows the same "W.W." Hank saw in season 4 (after he was given Gale's file). Hank recalls that very scene ("To W.W. my star, my perfect silence" etc.) 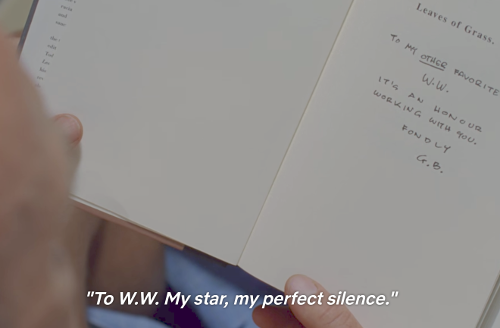 Walt might not have even seen that dedication, or paid attention to it. He didn't give much esteem to the book (nor to Gale), otherwise it wouldn't have ended up in the toilet!

25
What is the significance of Walt Whitman to a broader understanding of Breaking Bad?
17
Why Does Mike Dislike Walt, But Not Gus?
13
The last scene of the Breaking Bad mid-season 5 finale

25
What is the significance of Walt Whitman to a broader understanding of Breaking Bad?
6
Why doesn't Grey allow Anastasia to touch him?
12
How did Ant-Man manage to get big again?
7
Why did Jesse Pinkman leave Walter White?
28
Why was Walter White acting so strangely with the tequila during his remission party?
3
Why didn't Yuri Zhivago leave Russia with Lara and Victor?
11
What did Walter do that would make Gus want to kill him?
1
2067 Plot Hole Explanation