Why does Orochimaru put cursed seals on people?

We've seen that Orochimaru put cursed seals on some people like Sasuke, Sound Four and Anko. I never really understood why he did it. What did he get from it?

At first I thought that it had to do something with body compatibility, but the origin of the cursed seal is Jūgo, not Orochimaru.

Could someone explain better about the relation between Orochimaru and the cursed seals and why he put them on people?

You might already know that Orochimaru was not able to achieve Sage mode, so this was his alternate way to achieve it in his minions. From naruto.wikia.com:

During his research of Jūgo's clan, Orochimaru eventually tracked down the power source at the Ryūchi Cave and senjutsu. Although he lacked the body and chakra reserves strong enough to learn Sage Mode,[18] Orochimaru developed another use for senjutsu chakra: the cursed seals.[57] These seals contained some of Orochimaru's senjutsu chakra mixed with the enzyme produced by Jūgo, triggering a change similar to Sage Transformation, but with different side effects. These cursed seals can be used to enhance the power of one's techniques,[58] and serve as anchors to Orochimaru's consciousness, allowing him to observe events through anyone branded by the seal. He can even be revived any number of times through the Evil Releasing Method, provided there are enough cursed seals and DNA.

His minions did become stronger with this seals. It's a shortcut to
get stronger minions as mastering sage mode naturally is not that easy. And he gave it to Sauske to trick him by helping him to give more power but his motive was to make him his next vessel.

And this cursed mark can be used like his CCTV camera and horcrux at the same time. He can be revived form the cursed mark and also get all the knowledge of event from the host, as he did with Anko in Fourth Shinobi World War.

So it's a win win situation for Orochimaru, so it's god for him to give it to so many people. 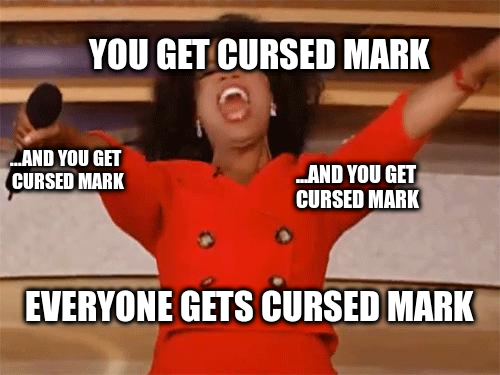 Not the answer you're looking for? Browse other questions tagged plot-explanation character naruto .

4
What was the explanation of the 51 people burned alive on the train in For Greater Glory?
26
Why does Jeanie help Ferris out at the end of Ferris Bueller's Day Off?
10
Why is Carrie distraught while watching Saul's hearing before the Intelligence Committee
3
Why does Nilo make the dangerous truck trip to the burning oil field?
5
How come the Beast allows Belle to ride off through the woods ridden with wolves to rescue her father?
3
Who cursed the Aztec gold coins?
10
Why does Gaff spare Rachael's life?