What rank is Lord Beckett?

What rank is Beckett? I do not think he is the king of England, but what is he? I mean... his name has "Lord" in it. I am not sure if he is royalty or the commander of the Navy? I don't think is ever says in the movies exactly where he gets his authority from. 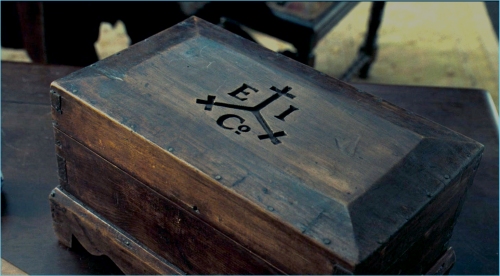 The East India Company (EIC), also known as the Honourable East India Company (HEIC) or the British East India Company and informally as John Company,1 was an English and later British joint-stock company,[2] which was formed to pursue trade with the "East Indies" (in present-day terms, Maritime Southeast Asia), but ended up trading mainly with Qing China and seizing control of the Indian subcontinent.

Originally chartered as the "Governor and Company of Merchants of London trading into the East Indies", the company rose to account for half of the world's trade, particularly in basic commodities including cotton, silk, indigo dye, salt, saltpetre, tea, and opium. The company also ruled the beginnings of the British Empire in India...

In its first century and half, the EIC used a few hundred soldiers as guards. The great expansion came after 1750, when it had 3,000 regular troops. By 1763, it had 26,000; by 1778, it had 67,000. It recruited largely Indian troops, and trained them along European lines.[31] The military arm of the East India Company quickly developed to become a private corporate armed force, and was used as an instrument of geo-political power and expansion, rather than its original purpose as a guard force, and became the most powerful military force in the Indian sub-continent. As it increased in size the army was broken into the Presidency Armies of Bengal, Madras and Bombay each recruiting their own integral infantry, cavalry, artillery and horse artillery units. The navy also grew significantly, vastly expanding its fleet and although made up predominantly of heavily armed merchant vessels, called East Indiamen, it also included warships.

In Pirates of the Caribbean (DMC/AWE), Beckett is Governer of the Company and was given the title of "Lord". It is also stated that he is a duly appointed representative of his Majesty, the King (George II).

Cutler Beckett was the Governor of the East India Trading Company. Born and raised in a prosperous merchant family in England, Cutler Beckett joined the East India Company after a fight with his father. For many years he faithfully served the Company, eventually becoming the Director of West African Imports and Exports for the Company.http://pirates.wikia.com/wiki/Cutler_Beckett

Lord was a title given to a male who held power and authority. Cutler Beckett of the East India Trading Company was granted the title of Lord at some point prior to assuming control of Port Royal.1 His mentor Reginald Marmaduke Bracegirdle-Penwallow was also a Lord at some point before the late 1720s.[2] Lord John Carteret served on the Court of King George II around 1750.[3] http://pirates.wikia.com/wiki/Lord

As and Aside: Beckett also knew Jack from before the start of series. Their story is featured in the novel, Pirates of the Caribbean: The Price of Freedom.

Pirates of the Caribbean: The Price of Freedom is a 2011 adventure novel written by A. C. Crispin, the last to be published during her lifetime. A prequel to the film series, the book details the adventures of Captain Jack Sparrow when he was in the employ of the East India Trading Company as well as following how Jack was branded as a pirate and became captain of the Black Pearl. It was published in hardcover from Disney Editions, on May 17, 2011.http://pirates.wikia.com/wiki/The_Price_of_Freedom

Lord Beckett is not a member of British royalty. He is a member of the British aristocracy and peerage (with a title lower than duke) and commands East India Company forces because of his high position in the Company.

If 18th century British people consistently call Cutler Beckett "Lord Beckett" he is almost certainly a peer or the son of one. He might have been made a peer of Great Britain in his own lifetime as an honor and a reward for achievement, or for simply becoming rich, or he might have inherited the title or titles.

Thus Beckett might be the Baron of Dymchurch or the Viscount of Midwich, etc., etc. If he has only one title, he could be a baron, a viscount, an earl, or a marquess. Dukes and duchesses are not called"Lord X" or Lady X", so he is not a duke.

If Cutler Beckett is a peer his title would probably have the form Baron (or Viscount, Earl, or Marquess) Beckett of (Someplace).

It is possible that Beckett is a son of a peer and is called "lord" as a courtesy title.

Beckett's power and authority to command ships and troops of the East Indian Company comes from being a high official of the company. He may have a military or naval rank in the army or navy of the Company or have a high civilian position in the Company.

The Pirates of the Caribbean wiki calls him governor of the East Indian Company. In British English a governor doesn't have to be ruler of a colony or other territory. In Britain the warden of a prison is called the governor, and I have read of "governors" of the Bank of England. Thus Becket might be one of the Company directors or one of the officials appointed by the British Government to supervise the Company later in the 18th century.

Not the answer you're looking for? Browse other questions tagged character pirates-of-the-caribbean .

10
Why does the accent of Leonardo DiCaprio sound so different in Blood Diamond?
11
Is the Keeper of the Code (Jack Sparrow's father) immortal?
10
Why would being US Navy prepare someone to be a great velociraptor trainer?
2
What is Vern's role at the recovery house?
18
Why is Jeor Mormont on the Wall?
5
Do fictional tv shows ever have multiple characters with the same names?
9
Why does Lord Beckett say 'finally'?
6
What is Tony Soprano's rank at the begining of the show?
5
What was Jackie Chan's character's full name in the Rush Hour movies?