In the 1991 movie The Naked Gun 2 1/2: The Smell of Fear, there is a joke I don't get. It's in the scene after Frank Drebin finds out Jane Spencer is going out with one Quentin Hapsburg. He gets depressed and heads to the "Blue Note" jazz bar. There are four pictures on the wall:

Who is the fourth guy?

He was a US presidential nominee in 1988.

From the link above as well as the comment below, it details that he lost terribly to George H. W. Bush (The first President Bush) in that election. Seeing that the previous pictures, show disasters in which it was assumed the object in the disaster would succeed, the movie shows Dukakis as someone who experienced a great defeat though he went into election assuming otherwise. 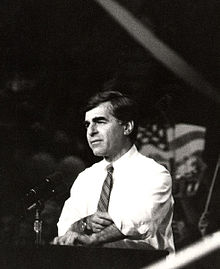 Not the answer you're looking for? Browse other questions tagged naked-gun-2 .