Why doesn't the Flash have lightning fast reactions?

This has bothered me for a while now in The Flash. Barry can run faster than anyone or anything and while running, he almost never bumps into anything. You would assume you need a super fast reaction time to be able to dodge everything in your way while traveling at mach 2 or some ridiculous speed.

Yet he can still be caught off guard. Like when another speedster starts running, he needs like two seconds to realize and then he takes off. Wouldn't you think he'd need like a split second to react to another speedster trying to get away from him?

First, from a story telling point of view, if he did, he could never be beat. Same reason he doesn't just run in at supersonic and knock everyone unconscious every episode.

Otherwise, the show and the comics are both fairly consistent in that a Speedster, someone connected to the Speed-Force, behaves differently in motion then at rest. They have to actively move fast in order to benefit from most of their powers. They do not always perceive things as moving slowly compared to themselves. They have to willfully, mentally, or otherwise tap into their speed.

In the same way, Barry can travel at Mach 2 without significant friction, or sonic booms destroying things at ground level, he can see faster than human visual perception, can hear things while traveling at mach speeds without any change in pitch (hello red shift), etc. The Speed-Force adjusts for this. It's basically magic.

As an alternative, the Barry from the show is still a rank amateur. He still hasn't accessed everything about the Speed-Force, and is frankly an idiot when it comes to many situations... because he can't think creatively about the use of his powers. He's 2 in super-power years, and just doesn't know how or that he can be at super speed/perception at all times. In the comics, there is one point where Flash (Not sure if Barry or Wally) end up moving so fast that he essentially becomes an omnipresent ghost in Central/Keystone city, and only communicated through Speed Mirages to his kids.

Marvel Speedsters in comparison, tend to suffer from an accelerated point of view. Quicksilver specifically: 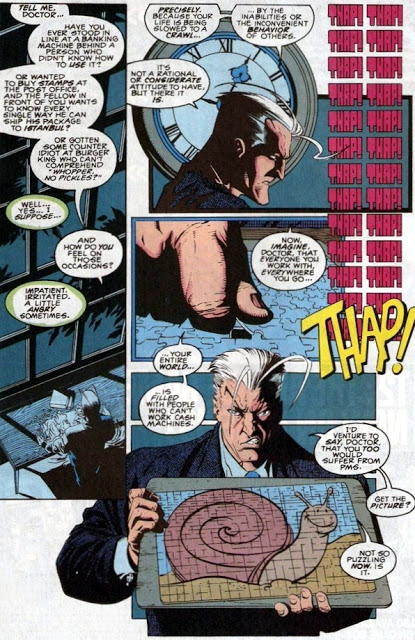 There was a better panel where he describes it in relation to dinner with friends that I wish I could find. It's consistently shown in the cartoons and movies that Quicksilver has speed related ADHD. DC speedsters, who pull their speed from the Speed-Force as needed, typically do not (Except for Bart Allen, who grew up with the Speed-Force from birth).

3
Do the DC speedsters need to accelerate and are not fast from the start like Quicksilver in the movies?

4
Was The Reverse Flash gay?
2
Why doesn't anyone find out the masked man's identity in The Flash
6
How did Jesse run in an eight-like fashion without wearing the special speedster suit?
7
Why Does the Reverse Flash Vibrate?
2
Is the Flash really the "Fastest man alive"?
9
Why does Iris West have purple lightning?
4
Why does lightning hit affects speedsters?
6
Why is Harrison Wells the reverse flash in season 5 of Flash?
3
The Flash S5 - What's the point of Nora in 2049?