What is the real name of the Resident Evil character "K-Mart"?

In the Resident Evil series (first on screen in Extinction), there is a girl who calls herself K-Mart. She's quite the fan of Alice, so eventually this happens:

She befriends and looks up to Alice as well and gives her a bracelet for luck. When Alice inquires about her real name, K-Mart explains that she "never liked" of her old name and given the circumstances, it was "time for a change".

On the wiki link above there is nothing about her real name, only that she named her after the place where the group found her.

Q: So I was wondering what K-Mart's real name really is?

Her given name is Dahlia Julia Mancini (AKA "D.J.", AKA "Kmart"), as confirmed by the film's official novelisation

She had been born Dahlia Julia Mancini, and there wasn’t a single one of those names she was willing to be called in public. Her friends mostly called her D.J., but she didn’t really like that, either, since it made her sound like she should be on a radio station or something stupid like that.

When everything went to hell, she’d been working in a Kmart, and eventually, she just holed up there, along with the other employees and most of the surviving citizenry of Athens.

She refused to tell them her name. This was a new beginning for her, and it started in that Kmart. Besides, being called that reminded her of the rest of the people who’d died when she survived. They lasted longer than the rest of Athens, holed up in that Kmart, and she wanted to remember them a lot more than she wanted to remember that she was named Dahlia Julia Mancini.

So when L.J. started calling her Kmart, she decided to respond to that only. 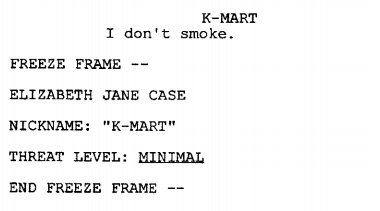 K-Mart explains that she changed her name after Claire and the others had found her in a Kmart store. She states she did not like her name and decided to change it because all those she knew from before the outbreak were dead. In the novelisation of the film, Carlos reveals that her original name was Dahlia

In the novel, her name is revealed by Carlos Olivera and confirmed by K-Mart to be Dahlia.

So everything points to her real name being Dahlia, which was confirmed by the novel Resident Evil: Extinction.