Why is Los Angeles targeted for destruction so often in Hollywood movies?

One of my favourite types of films are ones where some form of cataclysm occurs (morbid I know). But one thing I have noticed in many films is the destruction of the city of Los Angeles (sometimes destroyed by itself and sometimes destroyed alongside other cities).

Asides from the obvious Battle Los Angeles, there are:

just to name a few.

So, it can be seen that the destruction of Los Angeles seems to be a prominent inclusion in many disaster films. Even if the focus is not on Los Angeles, the city's destruction is often included (e.g. the example above about the Day After Tomorrow).

Is the reason for the continued cinematic destruction due to the vicinity of Hollywood to Los Angeles or is there another documented reason for this?

In order for a city being destroyed to mean anything to the people viewing it, the city must be iconic and recognizable (unless it's fictional) and probably wants to appeal to people who either have visited or want to visit that city.

This means that, in the US, there are three big options for very iconic cities with buildings that are recognizable around the world and large amounts of tourism: New York, Los Angeles, and Washington, DC... and the Golden Gate Bridge. Obviously, there are other options, Chicago, Las Vegas, Seattle... But, let's look at your examples.

For this, I'm going to be using this really cool article, Map: How Hollywood Has Destroyed America. Which has some good data on the various manners of destruction of cities in the US (as a note, New York and LA are about tied).

I should think this one is pretty self explanatory: earthquakes and volcanoes have to occur in places where they occur. Everyone would be confused by an earthquake destroying the St. Louis Arch... most would argue, "earthquakes don't happen in the Midwest" (though they apparently have).

LA is on the San Andreas Fault line and is surrounded by geologically active mountains. In fact, how blase LA residents have become about earthquakes is often a joke in movies.

A classic scene from L.A. Story:

On their "Geologic Events" chart, the article has eight based in LA... though there are also four each in San Francisco and New York: 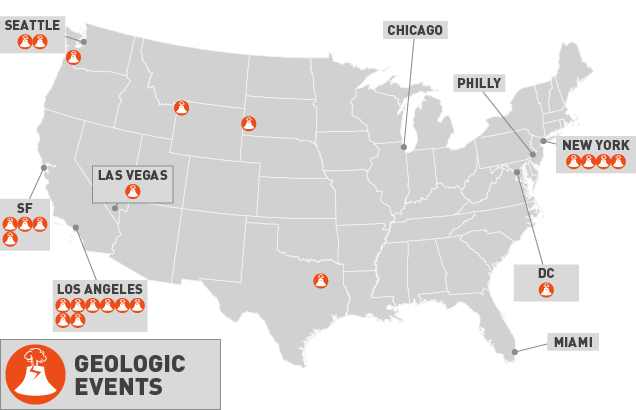 In keeping with the general scientific literature, geologic events—including volcanoes, earthquakes, and tsunamis—are mostly concentrated on the Pacific Rim. Los Angeles has been destroyed by geologic events at least seven times, but New York, which is not on the Pacific Rim, has still managed to be destroyed by a tsunami (Deluge and Quantum Apocalypse), an earthquake (Aftershock), and a volcano (Disaster Zone).

In fact, I'd argue that the reason there are so many earthquakes in films is because it's something people in LA deal with and worry about and they know it gives them something to produce locally.

As I've stated in comments above, Alien attacks generally aim for population centers. If they want to exterminate us quickly, they need aim for areas with the most people. In the US, the top two largest cities by population are New York and Los Angeles.

The Greater Los Angeles Area is the second-largest urban region in the United States, encompassing five counties in the southern part of the U.S. state of California, extending from Ventura County in the west to San Bernardino County and Riverside County on the east, with Los Angeles County and Orange County in the center.

Throughout the 20th century, it was one of the fastest-growing regions in the United States, although growth has slowed since 2000. As of the 2010 U.S. Census, the Los Angeles Metropolitan Statistical Area had a population of nearly 13 million residents. Meanwhile, the larger metropolitan region's population at the 2010 census was estimated to be over 17.8 million residents, and a 2014 estimate reported a population of about 18.5 million. Either definition makes it the second largest metropolitan region in the country, behind the New York metropolitan area, as well as one of the largest urban agglomerations in the world. [emphasis added]

If you're a film company based in LA, you're probably going to pick LA over another city... but not that often... according to the data, LA barely skirts past DC (a much smaller population area) with four events to DC's three. 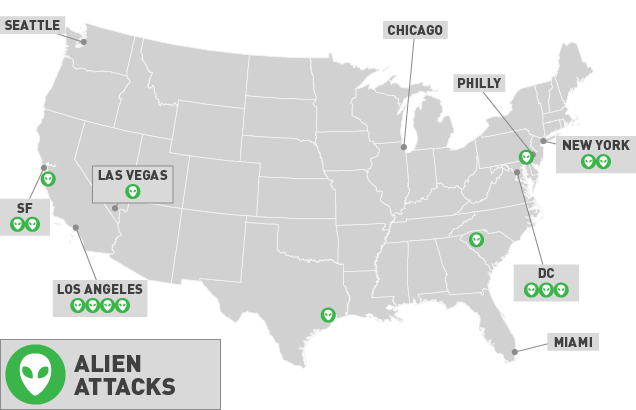 Weather happens everywhere and the data backs this up... While LA does have three weather-related city destruction films, many of the 22 films in this category are set in the area called "Tornado alley" with a large group occurring on the east coast. 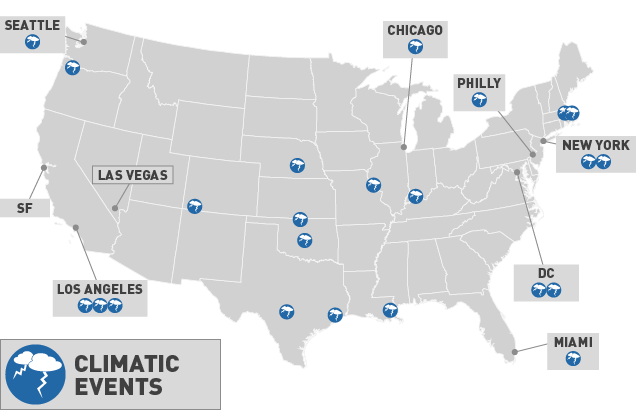 I get that your question doesn't say "Why is every film shot in LA?"... but I think that pointing out that many films aren't in LA will help balance the "Why are so many shot in LA?" question.

The article doesn't separate "Nuclear War" from other human destruction and it doesn't include movies where the actual event isn't shown:

Sometimes—in the case of invasions, terrorism, fires, and especially nukes—it turns out that MAN is the real disaster. This list doesn't include the many post-apocalyptic movies that make the same general point, but start after the disaster has taken place.

Regardless of this, LA is a common choice because of some of the arguments above... It's a population center. If China or North Korea wanted to obliterate an American city, it's natural that it would choose LA... It's the largest and closest American city to Asia.

To me, the choices largely seem natural, particularly when you add to this the fact that it's probably easier for a production company to shoot locally in LA. They have local crew that doesn't need to be moved to another city and then housed and fed, they have studios to shoot in, and all of the equipment they need. It makes you wonder why they bother shooting anywhere else... and the reason for that... is that it's very expensive to shoot in LA. I have no clue why their alternate choices are so often New York or San Francisco they're both much more expensive.

23
Why are there a lot of Hollywood-remakes of successful non-US-movies?
8
Why do most of the Hollywood movies have at least one non-white guy?
12
Why do many of the Hollywood horror movies use a mirror as a ghost's sign?
14
Why don't Bollywood superstars do more in Hollywood?
4
Do any Hollywood movies star only little people?
10
Is there a name for this illogical sequence of events that often shows up in movies?
3
Why is Atlanta Georgia becoming the new Hollywood?