Who is the man passing Sergeant James?

In the movie Hurt Locker (2008) (IMDb), near the beginning of the film, Sergeant First Class William James (Jeremy Renner) is in the EOD Suit during his first mission with his new unit, discovers that an IED he disarmed was actually only one part of a multi-part setup. Just as he pulls the cords discovering this fact 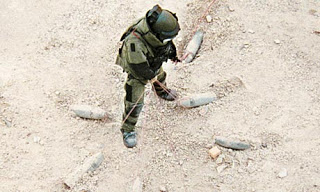 the scene moves up to the top floor of the apartment next to the device and we see a man watching Sergeant James. As James starts cutting free the detonators, the man runs down the stairs. Just as the man runs out to the street, James looks up and shows him the final detonator. The man then runs down an alley and drops what looks like a 9 volt battery. We then look at the end of the cord tied to a wall.

Was the man supposed to have detonated the IED? If so, this scene really doesn't make sense. IED's are not suicide devices, but rather remote detonated ones. With 6 or 7 155mm shells chained together, this IED would have destroyed the entire neighborhood.

I've never really understood this scene, except to show that Sergeant James is an reckless adrenalin/danger junky.

You are 100% spot-on with your assessment. The man shown was supposed to detonate the IED, and that many tied together would have taken out at the very least the building next to it (which is also the building the detonator was in).

Apparently, this movie got a lot of stuff wrong. But it's Hollywood, and telling a good story is much more important than telling a true story.

Not the answer you're looking for? Browse other questions tagged plot-explanation the-hurt-locker .

8
Why didn't James believe Beckham was alive in The Hurt Locker?
5
In “The Man with the Golden Gun” why does Hip drive off without James Bond?
9
How does Sherlock deduce the relationship between Sergeant Donovan and Anderson?
16
Who is James in “The Double (2013)”?
2
Is result shown from the explosion realistic?
20
Who was the man who slew the Kingsguard Knight?
8
Why did Master Sergeant Farell deny being an American?
3
How did Bucky get the rank of Sergeant?
4
How did the video of sergeant Brody end up in Saul's hands?
1
Why did Sergeant Han ask that question?