Is there any additional footage of 'The Trial of Captain Hook,' the play Michael starred in on Arrested Development?

In the sixteenth episode of the first season of Arrested Development, "Altar Egos," we see young Michael Bluth as a lawyer in a play (and again later in the tenth episode of season three, "Fakin' It"):

Narrator: In order to satisfy an English requirement, Michael appeared in the Drama Club’s production of an original play, “The Trial of Captain Hook.” 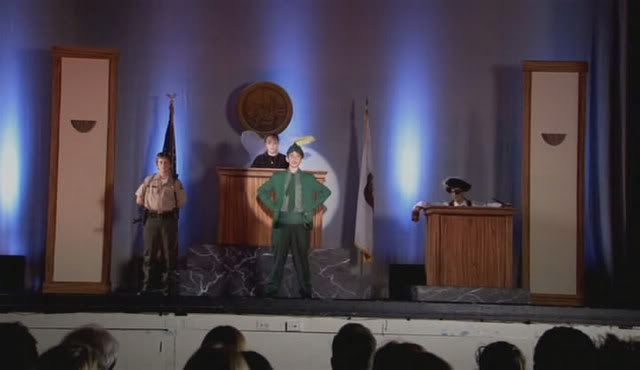 Logic suggests they wouldn't set up a shot that elaborate for about nine seconds of a joke, but maybe they would. Is there any additional footage of this play beyond what we see in these two episodes?

In Season 4, Episode 1, "The Trial of Captain Hook" is revisited with additional footage (15:00 minutes in). Here, Peter pan is bumping into the seal (of the court) while flying, Buster calling out about the newly dislodged "Loose seal" and then Lucille (being oblivious to this development) mistakenly believing Buster is calling her for attention.

It is unclear whether this is new footage (on a recreated set) or if it is previously unaired footage. I speculate that the courtroom and play was older, previously un-aired footage edited in with new, original reaction scenes with Kristin Wiig.

For further insight into this comedy, see this page about Hidden Jokes from Ep 1 & 2. 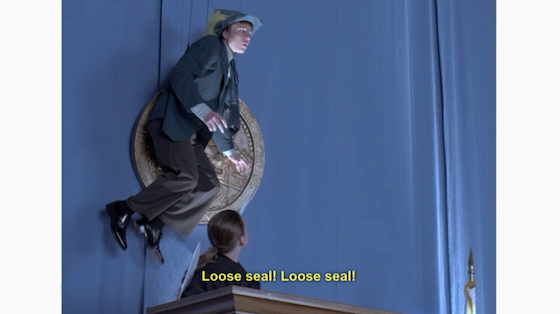 As far as I can tell there is no more footage. The DVDs do not include it as a special feature or in the deleted/extended scenes.

It is possible that a little more footage was shot than actually aired, however, your logic that they wouldn't set up a shot like that for a few seconds of footage is not really true. Arrested Development was notorious for having high ambitions and being an expensive show to film (that's part of the reason it was cancelled).

Not the answer you're looking for? Browse other questions tagged arrested-development .