Random cartoon from the 90s? [closed]

I'm trying to remember a cartoon that aired in the mid or late 90s (I think 1996-1997), the good guys drove high tech armored vehicles (It was not MASK) and had specialized suits. One of the vehicles eventually gets an A.I. installed and starts talking with it's driver. I can't remember any of the other good guys.

There were 3 main bad guys that were some kind of cyborg or android (2 male and 1 female, no it is not Centurions), who were trying to grow their forces by assimilating normal humans, but would be defeated by the good guys. I remember a scene with some kind of robotic tentacle around normal peoples neck, head, or chest who would be in the beginning stages of the transformation process. Also the leaders of each group (Good/Bad Guys) were brothers opposed to each other, which the villain used against the hero.

The series ended with one of the heroes being captured and being turned into a cybernetic creature who sacrifices himself after the change to save the rest of his friends. Also all of the villains underwent some kind of cocoon hibernation which upgraded them and made them stronger.

Does anyone have any idea what I am talking about?

From Wikipedia, here's the synopsis:

The VOR-tech undercover conversion squad is a group of secret agents led by Hudson Roarke. Their mission is to stop Lord Matrix, Hudson’s older brother, and his evil Bio-Mechs from infecting the world with a techno-infectious plague. In their battle with the Bio-Mechs, VOR-tech agents use special computer systems with VOR-technology that imbue them and their vehicles with special powers. VOR-tech agents also had special masks and transforming vehicles.

From Retro Junk, more details about the villains:

Something went hideously wrong and it transformed him into a Bio-Mech i.e. a techno-organic being.

This particular nanotech strain went under the name of "The Matrix". When someone is exposed to The Matrix, it transforms them into a Bio-Mech.

Thanks to botsmaster at deviantART, here's the rogues gallery: 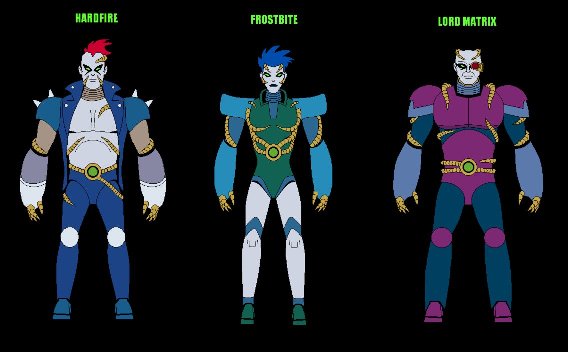 Watch a few clips from the show here, here and here.

10
Why are cartoon coconuts (on trees) brown?
9
What was the longest successful Primetime cartoon prior to The Simpsons?