The background of Michonne's walker drones

Does anyone know the true background of the walker drones that Michonne slaughtered before she and Andrea were taken to Woodbury in The Walking Dead?

So far, all I have been able to determine is that, whoever these walkers were, Michonne knew them -- they had betrayed her in some way (possible abuse, assault or attack) -- and has been quoted as saying that they deserved it...

Does anyone have any clues, possibly from the comic books?

It was her boyfriend and a friend of his. It was mentioned on the comic but not on the TV show (as far as I remember).

In the early stages of the outbreak, Michonne runs on foot to her house. This attracts a street full of zombies to follow her. While she arrives home, she meets her boyfriend, Mike and his brave but idiotic best friend, Terry. A zombie tries to break in but Mike kills it. In the process, Mike becomes bitten. At that time, Michonne bandages Mike, who is unaware that he is infected. That night, Michonne searches a neighbor's house for supplies and discovers her trademark sword. She gets pinned down in the house during the night and returns home the next day, finding that both Mike and Terry have become walkers. She manages to survive their attack and lock them away.

Her noisy encounter causes her street to become overrun. Michonne becomes trapped and runs out of food. She notices walkers don't attack one another and hacks off the arms and lower jaws of Mike and Terry. She chains them up by their necks to use them as escorts for an escape that was successful. Michonne says her final words to the zombified Mike and Terry, to help remember who they are, and because she has no one to talk to.

Here's an image I found with Michonne fighting off the two of them: 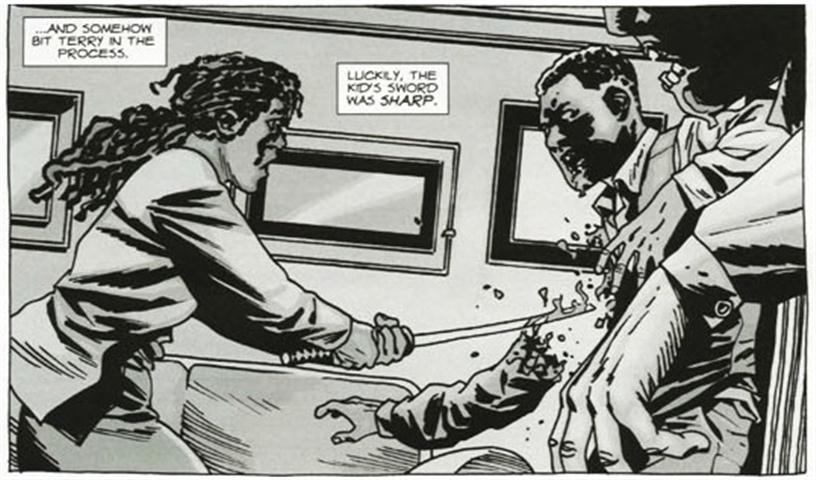 From the show (S04E09), we see that the boyfriend and his friend are named Mike and Terry respectively.

12
As of S03E01, does walker blood have an effect on open orifices/wounds?
10
Why not use drones to repair attack drones in Oblivion?
6
Is there any difference between a "Walker" and "Zombie"?
1
What was Thomas' background?
6
What are Walker guts made of?
6
Why don't Michonne's walker drones try to attack her?
5
How was the White Walker aware of the situation?
3
Did Trish Walker get injected?
0
How did Patrick get the killer virus that kills you so you convert to a walker?
3
Who is the walker that Michonne saw in Season 4 Episode 9?