How did Daniel Atlas get the “Suck It” card into Thaddeus Bradley's pocket?

In the scene where Thaddeus Bradley visits the Four Horseman before their second show, J Daniel Atlas performs a trick where he somehow gets a card with the words "Suck It" into Thaddeus Bradley's pocket. 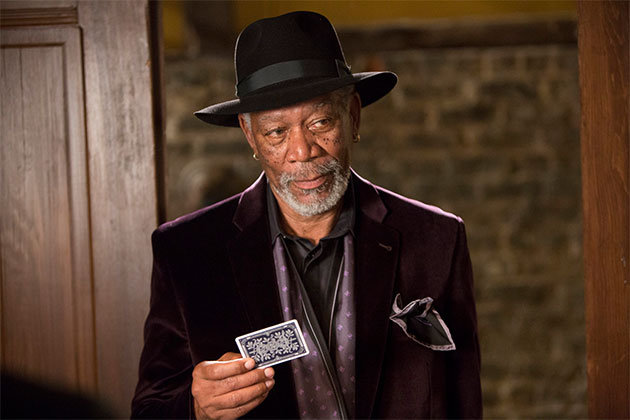 How did this trick work? Surely somebody with as keen of an eye as Thaddeus would have noticed a card being placed into his pocket?

I'm inclined to say we just don't know and neither are we supposed to know.

While the movie followed to a large degree the concept of a heist movie and explained many of the Four Horsemen's schemes and tricks as just that, it also ultimately lived from the fascination with magic and illusions and still left some things to just that in turn. There are many parts in the movie where we see amazing magic tricks performed without a clear idea how they're done and they're not explained to us, from Henley flying inside a huge soap bubble, to Dylan Rhodes disappearing from Thaddeus Bradley's prison cell behind his back. They're simply magic tricks.

While you could call those things just easy-out plot holes, a more optimistic viewpoint would see them as contributing to the movie's inherent theme of celebrating the fascination of stage magic and the reliance on faith in contrast to just getting everything explained and thus spoiled. But whatever your approach is, the ultimate truth is that there are a million ways to contrive a way for Atlas or anyone else involved to get that card into Bradley's pocket. But it just wasn't explained in favour of showing a nice magic trick, which would be far less effective if its explanation was obvious enough to give a clear answer.

I am aware that this might not hold as much of a classic answer, seeing that I just say, we don't know. But unfortunately that is the only answer that can be given here without delving into entirely ungrounded speculative fan-fiction, since the movie intentionally eschewed an obvious answer as part of its staging.

I would say that Dylan Rhodes would have planted that card in Thaddeus's pocket, and would have told Four Horsemen to make it look like they did it. That would make him look like an idiot in front of them.

Not the answer you're looking for? Browse other questions tagged plot-explanation now-you-see-me .