Was Lord Bowler an American Cavalry Soldier before he became a bounty hunter?

I'm watching The Adventures of Brisco County Jr. (currently on S01E07) and I've noticed that his pants have a yellow stripe down them. According to what I know, American calvary soldiers during and after the Civil War wore pants with a yellow stripe down them exactly like Lord Bowler's. I also know there were African American cavalry soldiers during the time period, so this seems very plausible to me, but I couldn't find anything online nor have I seen anything during the series to confirm this. Any evidence other than his pants to support this? I imagine there are plenty of other explanations to explain this besides him behing a former cavalry soldier.

Here's a snap shot revealing the yellow stripe on his pants. 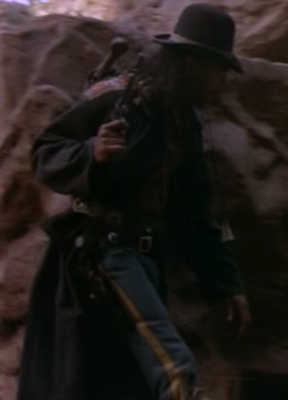 was First Sergeant in the US 10th Cavalry. The Cavalry trousers he wears are an artifact of his time in the Army.

During his time in the Army, he met the love of his life, Lenore Raymond, but couldn't do anything about it because she was married to a Lieutenant.

(This information is revealed in Episode 18: "Hard Rock")

Not the answer you're looking for? Browse other questions tagged character brisco-county-jr .

4
What was the impetus behind making Steve Austin “better than before”?
3
Was Assistant DA Serena Southerlyn known to be gay before her exit on the show?
20
What was Saruman's motivation in the Lord of the Rings trilogy?
1
Was Raj playboy or after every girl before meeting Simran
3
Was the Winter Soldier inspired by Sky High?
9
Were Viktor and Alexander Corvinus acquaintances before they became immortal?
16
Where was Thanos before the events of Avengers: Infinity War?