Was Spencer Tracy's long monologue at the end of Guess Who's Coming To Dinner filmed in one take?

The film Guess Who's Coming To Dinner ends with a long scene in which Spencer Tracy does virtually all the talking.

In a recent conversation at Quora, someone asserted that this scene was shot in one take for some reason related to Tracy's health. As everyone involved in the production knew, Tracy was very ill and did in fact die very soon after shooting.

Knowing how severely ill Spencer was, Stanley Kramer, the director, used multiple cameras shooting at the same time from different angles because he sensed Spencer had only enough strength in him to do the speech once.

So I don't think that it means to say that they got the primary angle and came back later to do the others. I think the Quora author meant that all video and audio recordings of Tracy performing the scene derive from a single performance of the scene.

But as I explain there at Quora, it's hard for me to understand how this scene could have been in one take. If the passage of time is "real," how did the cameras get out of shot as we cut from one view to another? I raise several specific examples there at Quora, but perhaps here just one will suffice: when Tracy speaks the film's last line, “Well Tilly, when the hell are we gonna get some dinner?” the camera is in front of him. Then we cut to a camera far to his right, and this second camera sweeps left to track Tracy as he takes a few steps. How does the second camera fail to record the first camera? How and when was that first camera removed?

Without even examining the scene in microscopic detail, it's extremely unlikely that is composited from a single multi-camera take, even ignoring the cut-aways which could have been done at any time.

Here's the link to the reference YouTube video the OP's linked Quora article refers to, if we need timings.

Closer examination makes it impossible it could be done with three cameras on track dollies, which really they must have been in those days. It could probably have been done with 3 hand-held or these days steadicam, but there is no great hint in the camerawork that really points to it being done hand-held.

Ignoring cutaways (which includes Hepburn's crying bit, so much for that part of the folk tale ;) it would need a minimum of three cameras to achieve. There is no way I can find that they could all be there at the same time. 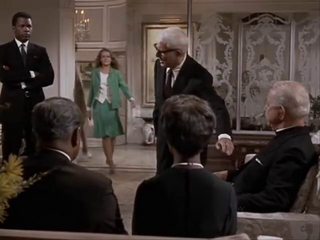 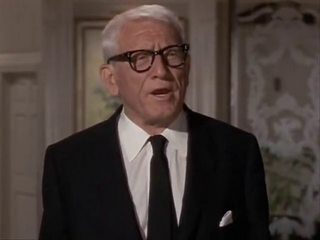 then the wides to first see Tilly & the subsequent cross-shot to Poitier & the daughter must be B cam. 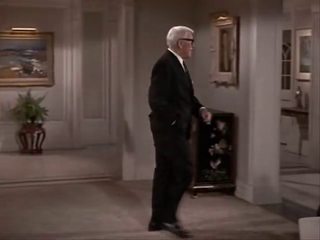 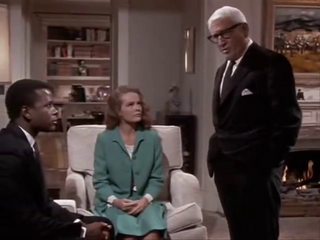 When Poitier sits, he is then no more than a foot or so from the window behind him. From the wides of A and B cam we know they must be placed at or about where the sofa is that the parents are sitting on; the establishing shot shows them and the sofa. Now, there's no doubt people can duck or slide in & out of position when not in shot - that's done all the time - but what they cannot do is move that sofa & window behind them in and out without some remarkable, utterly silent and non-distracting method.
Of course, sets are made with moveable walls, just so this can be done, but it would be utterly remarkable for them to do it live during a take.
We can see the floor in the room from perhaps 10 feet from the window in shots from A & B. That means there cannot be track on the floor in the main room area.

So, when we first turn around to see the parents sitting on the sofa, with Tracy and Hepburn in front of shot... that's it.
Done.
Game over.
The first giveaway shot starts at 7:31 on the linked video. 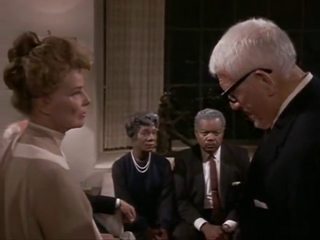 There is nowhere for A or B cam to be placed. That sofa is against the wall by the window. The shot tracks right the way across that windowed wall. There is no room in front for a camera to be placed and we already know from the establishing shot that A cam is behind the sofa.

There are repeated cues that reinforce this theory, but I'm not going to specifically mention them all, but whilst we're still on that window, see how the daughter moves… 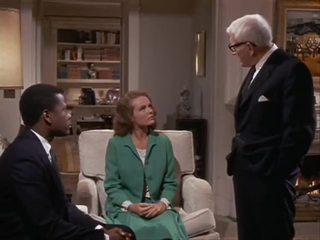 7:31 - cutaway, she's been cheated in a lot closer, no chair arm. [but this is an obvious cutaway, so forgivable, they do this type of cheat all the time] 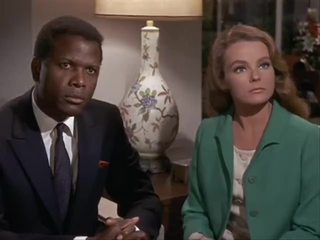 7:34 - she's just not there at all [watch the entire move, though she's ostensibly masked by Tracy, there's no way we wouldn't see any of her at all.] In this still you can just see Poitier's left arm in the corner of the shot. You can also see the lamp & vase… you cannot see the daughter. 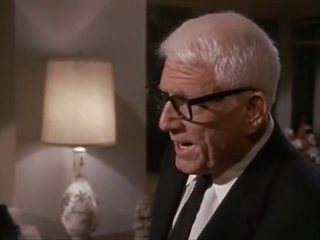 So we're left with… miraculous moving wall, miraculous jumping out of the way C cam and missing actress... or two takes, minimum.

We also have Tilly playing musical chairs. When she first sits, she's in front of the drinks trolley. Next time we see her she's moved a couple of yards, over by the piano. Sure, she could have been ducking out of the way of the rather speedy A cam, making sure she doesn't get in the way of the crew moving the wall & taking up A cam's track [silently] 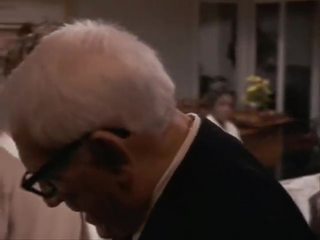 I'm prepared to accept if someone can prove [or give convincing evidence] that this was shot hand-held. I'd be more willing to accept C cam could be hand-held [the moves in/down and again out/up that bookend the part where Tracy is on the footstool could either be dolly or hand-held at a push], but that still leaves no room for A and B behind the sofa.

I guess we will never absolutely know for certain.
The folk tale of it being a single take is far more powerful than the mundanity of it being patched together out of many takes over many days, just like any other scene in any other movie.

I'll leave the first version of my answer below, as reasoning for why or how an actor can do a 10-minute speech on one take, repeatedly if [s]he is fit and healthy enough.

The linked article doesn't actually say it was shot in one take [although a later claim well down the comments insists that is indeed what was meant], he says Tracy nailed it in one take. That could simply mean they got the primary angle and came back later to do the others. Unless we can find someone who was on-set that day, anything else is speculation.
One thing - cameras were nowhere near as nimble in those days… no running back on steadicam so you can cut to the wide ;) The camera work, as was common for those times, is pretty slow and lumbering compared to modern cinema.

Actors, especially those with a theatre background, have a propensity for being able to remember long speeches. In theatre, not only do you only get one take, you have to do it again tomorrow, so the dialog is heavily drilled over a long period to make this as 'easy' as possible.
For film, there tends to be little true rehearsal like theatre, often just blocking for moves. Stand-ins cover all the principals' positions while the crew get all the lighting and camera ready to go.

I've seen many actors nail long scenes in one; I've also seen them repeat that over and over while the director got the other seven angles they needed for the entire scene. Most actors doing that tend to act up to spec for the close stuff and relax it off a bit for the distant or over-shoulder, so they don't burn out from the repetition.

Most of these were young and fit, perfectly capable of doing this for a day or more.
The one time I saw a senior actor do similar, they got his shots and the angles facing him and away from the other players, then replaced him with a loudspeaker and let him retire. The rest of the day involved everyone else and all the reverse shots to complete the scene. Having the loudspeaker rather than a stand-in/double reading the lines gave them better timing for everyone else. The double was used visually only.
Ironically, the speech was re-written and we had to go through a lot of it again a week or so later.

14
Is 'Birdman' the first movie to use the long take technique for events not occuring in real time?
12
How was pre-title opening in Spectre shot?
8
Why does the action look choppy in Captain America: Civil War?